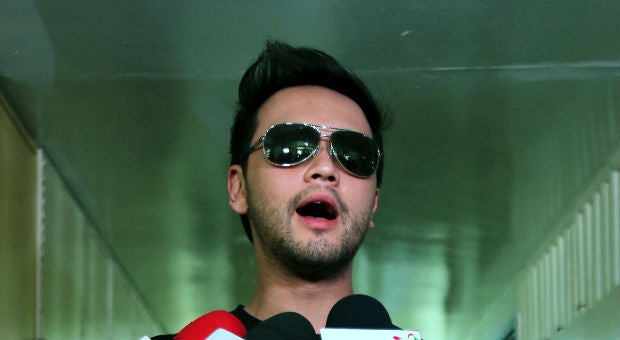 Singer and TV host Billy Crawford apologizes for his drunk behavior for the incident at the Taguig Police station 7 which led to his detention at the Taguig City police headquarters. INQUIRER PHOTO/RAFFY LERMA

MANILA, Philippines–Television host Billy Crawford was arrested after he barged into a police station in Taguig City early Sunday morning, drunk and demanding that he be detained over a still unknown reason.

During an interview with reporters later in the day, the host of “It’s Showtime” apologized for his behavior, confirmed that he was indeed under the influence of liquor when he asked the police to hold him because, according to him, he was stressed and wanted to be in a “controlled environment.”

Insp. Jonathan Aribe, commander of the Police Community Precinct (PCP) 7 at Bonifacio Global City, said that at one point, Crawford slammed his body against a glass door at the station, causing it to break.

As a result, charges of malicious mischief, direct assault, resisting arrest and disobedience to authority were filed hours later against him in the Taguig City Prosecutor’s Office, Aribe said in a phone interview.

This was denied, however, by Ernest Buenviaje, the TV host’s legal counsel, who told reporters that “no charges were being filed yet” as of 3 p.m.

According to Aribe, Crawford was clearly drunk when he arrived at the police station.

“He wanted to be imprisoned and during that time, only two policewomen were there,” Aribe said, adding that the other lawmen were out responding to a call for help, leaving Police Officers 1 Jasmin Sipagan and Rodelma Canao behind at the station.

When the policewomen asked Crawford why he wanted to be detained, he told them, “Wala na kayo dun [That’s none of your business]!” the police official said.

He added that Crawford suddenly started slamming himself against a sliding glass door at the station, prompting the policewomen to try to restrain him.

“But the more you restrained him, the more he resisted and he pushed and elbowed the policewomen,” Aribe said, adding that the glass door was destroyed as a result.

At this point, one of the policewomen called other law enforcers for backup. When they arrived after five minutes, the TV host was handcuffed, according to the PCP 7 commander.

Crawford was then taken to the Philippine National Police headquarters in Camp Crame where he underwent a medical checkup, a requirement for suspects placed under arrest.

He was supposed to undergo drug and alcohol tests at the Crime Laboratory but since he was not arrested for a drug-related offense, he was not tested for illegal substances, including alcohol.

In an interview with reporters at the Taguig police headquarters where city police chief Senior Supt. Arthur Asis said he was “under custody,” Crawford apologized for the incident.

“It was my fault for actually being aggressive. It’s a good thing it didn’t happen in a bar, it didn’t happen anywhere else. It happened in a precinct. The reason why is because I knew for a fact I needed to be in a controlled environment. So as I said, I really apologize to the officers if I said anything derogatory or anything else,” Crawford said, adding he went to the police station because he was “stressed out by certain

The TV host claimed that whenever he becomes angry, he doesn’t hide his feelings.

“If there’s someone that speaks derogatorily to me or anything, [I will get back at him]. It’s my protection. That’s one of the reasons why I went to the prison and said, ‘Just please arrest me.’ I do not want to be drunk roaming around or making a fool out of myself which I am right now. That was it,” he explained.

He said he calmed down when he was handcuffed.

“When I sat down, I just… I don’t know. This was the rest I was saying I wanted,” he said, adding he couldn’t “contain myself if I’m under the influence of alcohol.”

“I was going to say that was the only thing that was wrong for me. I just really apologized,” he said.

He said one lesson he learned was to “maybe lessen the alcohol and act like a grown up.”

“It’s really immature and it’s a shame for me,” he said.

Luis Manzano, an actor, showed up in the police station to show support for Crawford but he did not face the media.–With Julie M. Aurelio, PDI; and Aries Joseph Hegina, INQUIRER.net