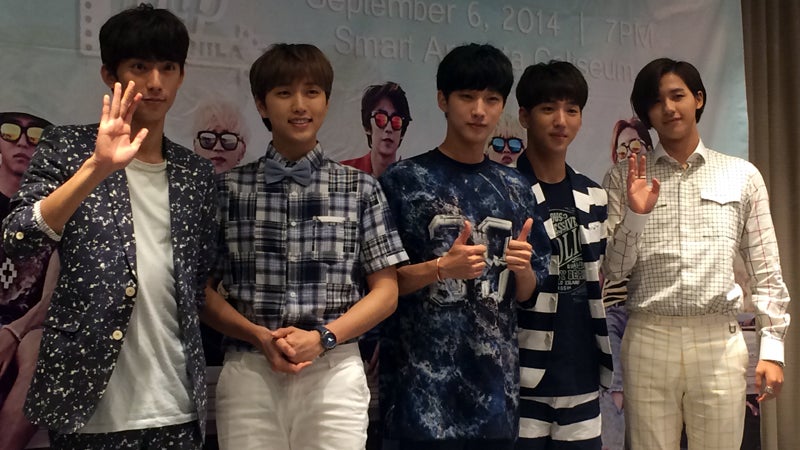 Though the Philippines and South Korea “are far apart,” CNU–one of the five members of the K-Pop boy band B1A4 –said that he was “really grateful” that the group gets a lot of support from Filipino fans.

B1A4, composed of Gongchan, Sandeul, Jinyoung, Baro and CNU, arrived in the country on Friday for the Manila stop of the group’s first world tour titled “Road Trip.” The band is set to regal K-Pop lovers in a concert tonight, Saturday, at the Smart Araneta Coliseum.

Through an interpreter, Jinyoung related that he and his fellow members were warmly welcomed by their supporters at the airport.

“They were chanting…We found out how passionate they are, so we got even more excited to perform here,” Jinyoung said at a press con held yesterday at the Marco Polo Hotel in Pasig City.

He also said that Manila was added to the group’s tour dates because “a lot of Filipino fans were asking us to do shows here.”

The five-man group, which recently released its fifth mini-album, “Solo Day,” is set to travel to Australia, Japan and the United States after its Philippine show.

“As the title of the tour suggests, I feel like I’m on a road trip in which I can meet fans from different countries,” Sandeul said.

The idol band, whose name was derived from its members blood types, debuted under WM Entertainment back in 2011 and is behind such hits singles as “OK,” “What’s Happening?” and “Lonely.” B1A4 likewise reaped awards at this year’s Seoul Music Awards and Golden Disk Awards.

Meanwhile, asked what he was looking forward to doing in the country aside from performing for the fans, Sandeul said he wanted to try lechon. Gongchan, on the other hand, would love to visit Boracay Island.

“I want to enjoy the sights,” he said.