Stunning Nymphet is kinda flaky. She cheated on High-profile Boyfriend not with Hunky Ex-beau, as many people thought, but with Powerful Patron.

According to the grapevine, PP has been “taking care” of SN for years.

HB got wind of SN’s two-timing and dumped the batty starlet—by phone! SN was shocked. “HB did not think SN was worth the trouble of a confrontation,” says a spy.

Turns out, SN is a chronic cheater. Years ago, she betrayed Teenaged Sweetheart with a nonshow biz guy.

Now it can be told.

GH is irked because Top Exec seems to be playing favorites. HH is getting all the good breaks and GH is forced to make do with the crumbs.

HH is overly eager in pleasing the bosses, says a mole. GH is the opposite and tends to be aloof.

Perhaps TE prefers talents who would go the extra mile to land a role. Hmm.

MF’s reps sent an inquiry and were floored by GP’s asking price: a cool million for the brief stint.

MF backed out and has not decided on a replacement.

Perhaps the officials were daunted by a few other items on GP’s tech rider, including GP’s permanent team.

Showbiz Insider bumped into Seasoned Veteran, the toast of the town over two decades ago.

The years have not been kind on SV. Failing to recognize SV, SI did a double take; SV turned beet red.

SI is not to blame. SV has been hooked on cosmetic surgery because of best buddy, Glamorous Celebrity.

Influential Personality often makes a big show of joining the masses in an annual populist event.

In real life, IP is a snub who shuns the working class.

A source reports that IP instructed the house help to give nothing—not even water to drink—to the workers hired for a renovation. IP would not even smile at the carpenters.

Well, that pema-frown could be the result of Botox abuse. 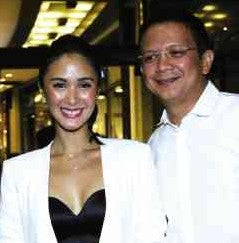 HEART Evangelista and fiancé Sen. Chiz Escudero plan to enjoy their engagement before thinking about a baby. KIMBERLY DELA CRUZ

Heart on reconciling with her mom: “Na-touch ako… kahit hindi pa ako 100-percent sure kung ano plano nila on the day of the wedding …. It was good enough for me that they allowed me to move on to the next chapter of my life.” (Parents are surprising creatures…)

CRISTINE Reyes is not engaged but says she is discussing it with her beau.

Heart, asked if she wants her dad to walk her down the aisle: “Sana …. Pero hirap siya mag-let go of me …. Ano man ang desisyon niya, tanggap ko.” (And miracles happen.)

Heart, asked if she’s ready to have a baby: “One at a time! I will enjoy my happy ending first.”  (Ending agad?)

Heart on Senator Chiz: “I’ve been through a lot in my life. But with him around, I’m not so afraid of the world anymore.” (As in, the world talaga?)

Nadine Lustre on her rumored relationship with James Reid: “We both value this career. Parehong ayaw pa namin.” (OK lang sa amin, whatever.)

Anne Curtis, asked if she’s considering marriage: “Not any time soon. But hopefully in four, five years.” (Thou shalt not rush anyone to the altar!)