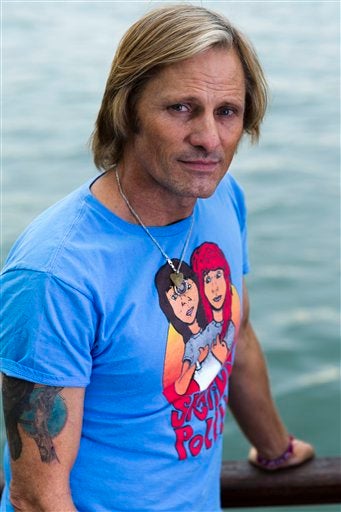 VENICE, Italy — Is there a language Viggo Mortensen doesn’t speak?

The multilingual Danish-American actor has performed in everything from English to Elvish. Now he tackles French — as well the power of silence — in Venice Film Festival entry “Far From Men,” a stark story about two men, a schoolteacher and a murderer, caught up in Algeria’s war for independence.

Mortensen also learned some Arabic for the film by French director David Oelhoffen. So how many tongues has he used onscreen?

It’s possible he may have left out one or two.

Mortensen — tanned, muscular and radiating energy while meeting reporters in Venice — said he chooses roles for the chances they give him to study, learn and gain new skills.

“You only can improve if you’re challenged,” he said. “You either learn or you fail.”

It’s 1954, and as an uprising stirs against the French colonial power, he is ordered to escort a man accused of murder to town for trial, and certain execution.

Daru would rather offer the doomed Mohamed (French actor Reda Kateb, who was in “Zero Dark Thirty”) the chance to escape, but the prisoner is stubbornly reluctant to avoid death.

Based on a story by Albert Camus, Oelhoffen’s film unfolds like a Western, full of silence, rugged landscapes and big skies. As the two men traverse the rugged and lawless Atlas mountains, both face moral choices, and discover that despite their differences they must unite to survive.

Mortensen, who was born in New York to Danish and American parents and spent part of his childhood in in Argentina, said he identified with “a certain displaced quality” in the film characters.

“He’s denying his past, and he’s running away from life on some level,” Mortensen said. “He is also saying no to life, just as much as Mohamed is.”

The movie has been praised in Venice, where some see it as a leading contender for the top prize, the Golden Lion.

Its theme — the fragility and importance of communication across barriers — is close to Mortensen’s heart.

“The world is becoming more polarized … even though the possibility for global communication has never been more ample, more conducive to understanding one another,” the actor said. “I think people use the new means of communication for further underlining their particular way of looking at things.

“So you become more isolated … even though it ought to be the other way around.”

Talking, in myriad languages, is a feature of many of Mortensen’s movies. So, the actor says, is walking.

“It’s probably a coincidence but maybe not: I’ve done a lot of movies where I walk a lot.”

Mortensen mentions “The Lord of the Rings,” ”The Road” and the Argentine film “Jauja,” as well as “Far From Men.”

The physical thread continues in his upcoming “Captain Fantastic,” about a self-sufficient family struggling to adjust to urban life.

Throughout his career, Mortensen, 55, has moved between blockbusters such as “The Lord of the Rings” trilogy — he played Aragorn — and edgier fare like David Cronenberg’s Russian gangster story “Eastern Promises” and Freudian drama “A Dangerous Method.”

He has been admired for his ability to make independent features while retaining box-office clout.

“If I keep doing independent movies maybe eventually people won’t say that anymore,” he said. “But I’m not worried about that. I think good work eventually finds an audience.

“I don’t look for big movies or small movies. I’m just looking for stories that I want to see in the movie theater.”