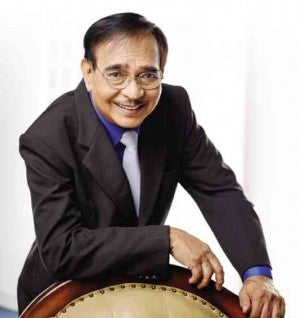 For days now, “Ang Dalawang Mrs. Real” has been upstaging the competition, due to Maricel Soriano’s character’s being on the warpath, after belatedly learning that her husband has married another woman.

As a result, other teleseryes have had to work extra hard to retain their loyal viewership. Which is why those productions were relieved to see  that Maricel had apparently run out of vituperative verbal attacks and physical assaults—so they could finally relax!

Uh, not so fast. Maricel may be simmering down, but the series has very cleverly shifted the onus of its “attack mode”—to Tommy Abuel’s character!

As the father of Lovi Poe, Dingdong Dantes’ second wife in the show, Tommy was a relatively laid-back presence on the series some weeks ago—but now that he’s found out that his new son-in-law is a bigamist, he’s suddenly gone on the attack himself! Thus far, he’s beaten up Dingdong and just recently, he kicked Lovi out of his house without her baby, to teach her a really “tough-love” lesson!

Ironically, Tommy is suddenly making life difficult for the show’s other principals, despite the fact that he too has another family on the side! His poor wife (Susan Africa) keeps reminding him of his own sins, but she’s too weak to really stand up to him—even if it pains her to see Lovi being treated so cruelly by her own father!

So it looks like the now vengeful Tommy will continue “Mrs. Real’s” “attack” thrust for some more days, to the competitor’s displeased discomfiture. Well, there’s nothing left for  the other series to do but to hype up their own conflict ante, so that they won’t end up completely swamped.

Another notable development on “Mrs. Real” these days is the fact that the hitherto upstaged Lovi is finally being given more challengingly dramatic scenes to do, giving her the chance to score her own thespic points. Imagine being kicked out of your home in the middle of the night without your baby?   What a golden opportunity to turn the lachrymal waterworks on—big time!

Unfortunately, the way that “kicking out” scene was staged on the show, Lovi won few “awa” points from viewers,  because she just stood there on the dark street for many minutes, even after it started to rain really hard, and she was doused to the core of her being! What was she waiting for—Christmas?

Memo to Lovi: Viewers don’t like indecisive self-pitying characters— so get on feisty, proactive mode, quick!

Finally, now that Maricel  appears to have gotten some of her character’s bilious and vengeful anger out of her system, she’s sadly going back to decorative, gimmicky acting mode, irritating some viewers.

Recently, for instance, her character went to a spa and salon for a beauty makeover, and Maricel came up with an unnecessarily and fussily “entertaining” performance, chattering and gesturing, “reacting” to anything and everything happening around her, etc.

It was a veritable throwback to the “delightfully” sassy Maricel of yore—but 20 years after the fact, and therefore ending up as neither here nor there, making stupefied viewers wonder what that “diverting” display was for! The veteran actress should really act her age …

Read Next
Daughter: Joan Rivers is in ‘serious condition
EDITORS' PICK
Geek out at TOYCON 2022 powered by Smart Signature
UK’s Boris Johnson will resign, BBC reports
High-risk pregnancy: Reducing your risk is in your hands
House energy committee chair Arroyo bats for cheap electricity
High inflation: Your P1 is now worth only 87 centavos
Unemployment rate up to 6% in May
MOST READ
Suspect in grisly killing of missing woman in Bulacan arrested
Hong Kong suspends flight bans as it eases COVID-19 rules
Bongbong Marcos’ first order: Abolish PACC, Office of Cabinet Secretary
Kim Atienza’s daughter flaunts bikini body in response to critics of her ‘revealing photos’
Don't miss out on the latest news and information.