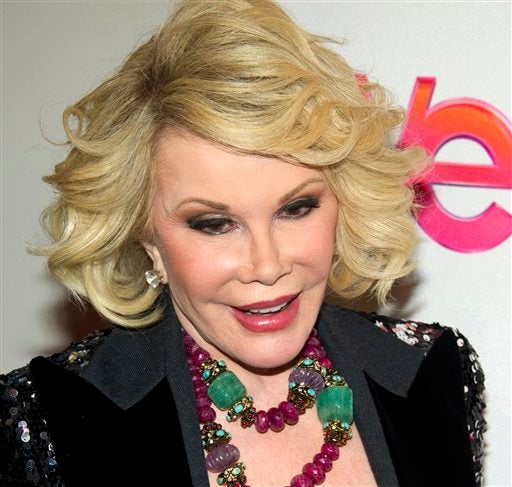 In this Jan. 19, 2012, file photo, Joan Rivers attends a screening of the Season 2 premiere of WE TV’s “Joan & Melissa: Joan Knows Best?” in New York. Two police officials say Rivers has been rushed in cardiac arrest from a doctor’s office to a New York City hospital, Thursday, Aug. 28, 2014. AP

NEW YORK — Joan Rivers remained in serious condition in a New York City hospital Friday, one day after going into cardiac arrest at a doctor’s office.

Melissa Rivers said in a statement Friday that her mother was “receiving the best treatment and care possible.” She also thanked Rivers’ fans and friends for their support.

“My mother would be so touched by the tributes and prayers that we have received from around the world,” Melissa Rivers said. “Her condition remains serious … We ask that you continue to keep her in your thoughts as we pray for her recovery.”

The Mount Sinai Hospital said it had no updates Friday. On Thursday, hospital spokesman Sid Dinsay confirmed that Rivers had been taken there that morning.

New York City police officials, who spoke on the condition of anonymity because they weren’t authorized to publicly name Rivers, said she was taken to the hospital just after 9:30 a.m. Thursday. It was unclear why she was visiting the doctor’s office.

The comedian with a half-century of show business under her belt has spawned a reputation for often-snarky red carpet fashion commentary. A show she had scheduled Friday at the Count Basie Theatre in New Jersey, has been postponed.

An early and outspoken proponent of cosmetic surgery, Rivers’ drastically altered her appearance over the years — and found plenty of material for jokes. (“I’ve had so much plastic surgery, when I die they will donate my body to Tupperware.”)

The host of “Fashion Police” on E! network, Rivers also presides over an online talk show, “In Bed With Joan” and co-stars with her daughter on the WEtv reality show, “Joan & Melissa: Joan Knows Best?”

Her latest book, “Diary of a Mad Diva,” was released this summer.

In 2009, Rivers emerged as the winner of NBC’s “The Celebrity Apprentice.” A documentary, “Joan Rivers: A Piece of Work,” premiered in theaters in 2010.

The New York native originally entered show business with the dream of a theatrical career, but comedy became a way to pay the bills while she auditioned for acting roles.

“Somebody said, ‘You can make six dollars standing up in a club,'” she told The Associated Press in 2013, “and I said, ‘Here I go!’ It was better than typing all day.”

After proving herself in comedy clubs as a rarity — a woman comedian — Rivers was a smash on her first booking on “The Tonight Show Starring Johnny Carson” in 1965. “God, you’re funny,” Carson told her.