Owen Wilson in Venice with ‘She’s Funny That Way’ 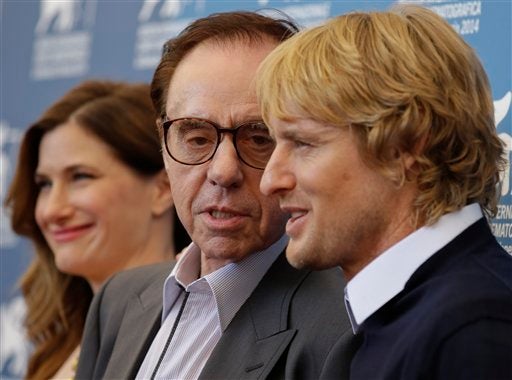 From left, actress Kathryn Hahn, director Peter Bogdanovich, and actor Owen Wilson pose during the photo call for the movie She’s Funny That Way at the 71st edition of the Venice Film Festival in Venice, Italy, Friday, Aug. 29, 2014. AP

VENICE, Italy — Movies — they don’t make ’em like they used to. Well, Peter Bogdanovich does.

The director, part of a generation that injected grit into American cinema in the 1970s, revives the froth and fun of classic screwball comedies with his latest film, “She’s Funny That Way.”

The movie, which has its world premiere at the Venice Film Festival on Friday, centers on a call girl and aspiring actress (an impressive Imogen Poots) who gets a part in a Broadway production directed by a client, played by Owen Wilson. The play stars the director’s wife (Kathryn Hahn) and her former romantic interest, a louche British actor played by Rhys Ifans.

Throw in an obsessive judge, a bumbling private eye and a therapist with anger issues (a hilarious turn from Jennifer Aniston) and — to simplify the increasingly convoluted plot — hijinks ensue.

Bogdanovich, who made his name in 1971 with small-town classic “The Last Picture Show,” said he was trying to a harken back to the comedies of Howard Hawks and Preston Sturgess — movies from an era before, he thinks, Hollywood lost its way.

“Comedies today basically depend a lot on body fluid jokes and vulgarity, and getting your appendage stuck in a zipper,” the 75-year-old director told The Associated Press during an interview in Venice. “It’s easy to get laughs with that kind of stuff because it’s basically shock value. I like character comedy.”

“She’s Funny That Way” recalls earlier Bogdanovich pictures such as “What’s Up, Doc?” and “Noises Off,” and received loud laughs from its first audience of journalists — relieved, perhaps, after days of heavier fare. Critics were divided. The Guardian thought it felt “musty and dated,” but London’s Evening Standard called it “a triumph, a retro screwball comedy that easily matches the classics of the genre.”

It’s a return to screens — and, for some, a return to form — for Bogdanovich, who has not released a feature film in more than a decade.

The movie, originally titled “Squirrels to the Nuts,” has had a long genesis. Bogdanovich and his then-wife Louise Stratten originally wrote the script for John Ritter and Cybil Shepherd. The director shelved it after Ritter’s early death in 2003, but later thought Wilson might be the one to bring it to life.

“He’s one of the very few actors today who is like an old-fashioned movie star, because he has a personality that comes across that’s very strong,” Bogdanovich said.

Wilson is an old hand at comedy, but said he found the demands of the movie, with its door-slamming, cross-talking and frenzied pace, refreshing.

“One person’s going out this door, here’s another person — when you’re actually doing it, it does kind of make you funny,” Wilson said. “There’s an excitement where it feels like sports a little bit.

“I think it appeals to the little kid in you who likes that kind of performing.”

“She’s Funny That Way” is set in an idealized New York where the sun always shines, taxis are always waiting and things generally work out — if not always for the best, at least for the time being.

It’s a movie that asks the audience to give in to its rhythms. It asked the same of the cast — and Hahn said they willingly obliged.

“It demanded a surrender to a genre that is a little nostalgic,” said the “Parks and Recreation” star. “I just knew it was going to be different comedy muscles.

She said there was no time for “loosey-goosey improvisatory discovering. You’ve gotta really nail it because it’s so much about the timing.”

If audiences embrace the movie, Bogdanovich’s time may have come again. And in the movies, timing is everything.

“A couple of actors have been asked how I direct,” Bogdanovich said. “And Joanna Lumley said, ‘Well, mainly he says faster, darling.’ And it’s true. Pick up the tempo. Frank Capra used to say film slows things down.

“So if you play something at a normal speed it will seem slow. Play it at a slightly faster speed and it will seem normal. So if you want to have speed, you’ve got to really speed up.”

5 things to watch for at the Venice Film Festival