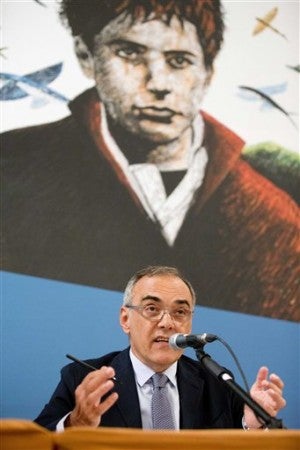 Venice Film Festival Director Alberto Barbera talks during a press conference on the presentation of the Venice film festival, in Rome, Thursday, July 24, 2014. The festival is set to run from Aug. 27, 2014 to Sept. 6, 2014. AP

There is a strong American presence, both behind the camera and onscreen, among the films in the running for the Golden Lion. They include David Gordon Green’s Texan drama “Manglehorn” starring Pacino and Holly Hunter; Abel Ferrara’s “Pasolini,” featuring Dafoe as taboo-breaking Italian filmmaker Pier Paolo Pasolini; and Italian director Saverio Costanzo’s “Hungry Hearts,” a suspenseful drama set in New York starring Adam Driver.

The festival, which mixes big-name directors and arty auteurs with the work of exciting newcomers, also includes “The Cut,” a drama by Turkish-German director Fatih Akin starring Tahar Rahim; Swedish director Roy Andersson’s “A Pigeon Sat on a Branch Reflecting on Existence”; and “The Postman’s White Knights” by Russia’s Andrei Konchalovsky.

Documentary-maker Joshua Oppenheimer competes with “The Look of Silence,” a sequel to his powerful investigation of Indonesian political violence, “The Act of Killing.”

Films from France, Italy, China, Japan, Turkey and Iran round out the competition lineup.

Pacino appears again at the festival, as an aging actor in Barry Levinson’s “The Humbling,” adapted from a Philip Roth novel. It is among the “out of competition” entries which are not contestants for the Golden Lion.

The 71st Venice Film Festival opens Aug. 27 with the world premiere of Alejandro Inarritu’s “Birdman or The Unexpected Virtue of Ignorance,” starring former “Batman” Michael Keaton as an actor struggling to get beyond a famous superhero role.

The festival runs to Sept. 6, when a jury led by composer Alexandre Desplat awards the Golden Lion for best film and seven other prizes.