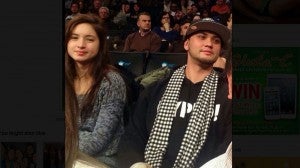 Crawford, 32, on Thursday admitted during the noontime program “It’s Showtime” that Garcia is his girlfriend.

Amid the teasing on stage and the shrieking fans, Crawford told Garcia, 22, to answer the question.

But the young actress said Crawford should be the one to answer it.

“Oo. Sinagot na nya ako (Yes. She did),” Crawford said before putting his arm around Garcia.

Last year, Crawford’s former girlfriend Nikki Gil hinted that a third party was the reason for their break-up. Besides Garcia, there were rumors back then linking the Filipino-American singer to actress Andi Eigenmann.

Billy Crawford: Coleen not my girlfriend yet