5 things to watch for at the Venice Film Festival 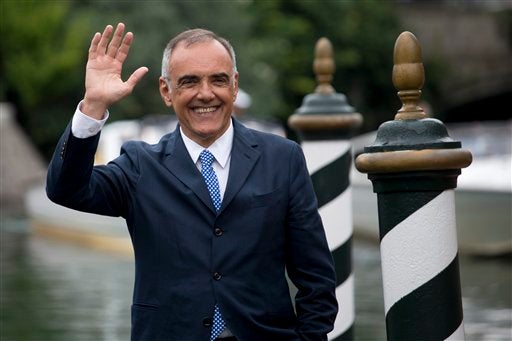 Venice Film Festival director Alberto Barbera poses for photographers on the jetty of a hotel in Venice, Italy, Tuesday, Aug. 26, 2014. The 71st edition of the festival opens on Wednesday, Aug. 27th and runs until Sept. 6. AP

Twenty films are competing for the coveted Golden Lion prize — 19 of them world premieres — and several dozen more will jostle for the attention of critics and audiences at an event that mixes adventurous fare from international auteurs with mainstream movies seeking awards-season momentum.

Here are five films, trends and themes to watch for:

The festival — and the annual awards-season battle — kicks off Wednesday with the world premiere of Alejandro Gonzalez Inarritu’s twisted comedy “Birdman or (The Unexpected Virtue of Ignorance).” 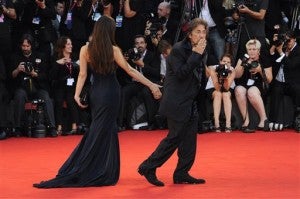 In this Sunday, Sept. 4, 2011 file photo, U.S actor Al Pacino and girlfriend Lucila Sola arrive on the red carpet for the film Wilde Salome at the 68th edition of the Venice Film Festival in Venice, Italy. Pacino stars in two Venice films this year, handily screening on the same day and both infused with bittersweet longing. AP

The revered veteran stars in two Venice films, handily screening on the same day and both infused with bittersweet longing.

In David Gordon Green’s “Manglehorn,” Pacino plays a small-town Texas locksmith pining over a long-lost love. In Barry Levinson’s “The Humbling” — adapted from a Philip Roth novel — he’s an aging actor having an affair with a younger woman, played by Greta Gerwig.

Another sort of battle is waged in Ramin Bahrani’s subprime mortgage drama “99 Homes.” It stars Andrew Garfield (“The Amazing Spider-Man”) as an evicted man battling to get his home back. The cast also includes Michael Shannon and Laura Dern. 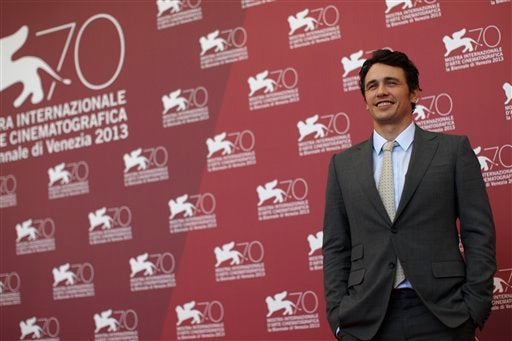 In this Saturday, Aug. 31, 2013 file photo, actor James Franco poses for photographers during a photo call to promote the film “Child Of God” at the 70th edition of the Venice Film Festival in Venice, Italy. This year the festival is honoring Franco, presenting the prolific American actor-director with the heroically titled “Glory to the Filmmaker Prize.” AP

Like its rival Cannes, the Venice film fest embraces actors and directors who are adventurous, unpredictable or down-right ornery. This year the festival is honoring James Franco, presenting the prolific American actor-director with the heroically titled “Glory to the Filmmaker Prize.”

Franco also will premiere “The Sound and the Fury,” his second adaptation of a William Faulkner novel, at an out-of -competition festival screening. It has an impressive cast that includes Seth Rogen, Tim Blake Nelson and Jon Hamm, but Franco’s screen version of the Southern scribe’s “As I Lay Dying” received a decidedly mixed response from critics.

Barbera said the festival wants to recognize a “peculiar and creative talent,” even if not all Franco’s creative risks paid off.

“He’s a writer, scriptwriter, filmmaker, stage director,” Barbera said. “He is not able to stop and have a rest, and he is creating all the time.”

Other directors sure to provoke include Abel Ferrara, competing for the Golden Lion with “Pasolini,” a film about the outrageous life and violent death of Italian director Pier Paolo Pasolini, starring Willem Dafoe.

And Danish bad-boy von Trier is likely to bore and thrill in equal measure with the director’s cut of his over-the-top sexual odyssey “Nymphomaniac.”

It’s the blend of big-name stars and cinematic surprises that makes festivals like Venice special.

And if there were a prize for best title of the festival, it would certainly go to Swedish director Roy Andersson’s “A Pigeon Sat on a Branch Reflecting on Existence.”