Orianthi: ‘The Queen of Shred’ 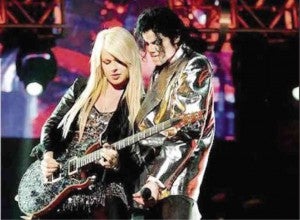 ORIANTHI Panagaris (left) kept her part in Michael Jackson’s “This Is It” a secret from friends.

Orianthi’s arrival in the Philippines, who is set to perform on select dates spread out among a few of the popular venues in the metro, kind of flew under the radar of various music aficionados due to the many other things happening in the country that have preoccupied them perhaps, as also with their attention on other foreign acts who are also scheduled to perform here soon.

Take it from me, a lot of people were bummed out to not have known sooner that one of the finest guitarists in the world was going to perform not only once but for a limited number of dates. As you read this, the only remaining date left to see her perform is on August 27 at the Hard Rock Cafe in Makati.

However, even if the opportunity for some of us to see her perform live might have passed, her arrival still got me interested to write about her as she is an artist whose name has been mentioned numerous times over and over again in the last few years. For most of us, we first took notice of Orianthi from the rehearsal footage shown from the late Michael Jackson’s ‘This Is It’ tour that sadly never took place.

The 29-year old Australian Orianthi follows the line of almost every young aspiring guitarist’s dream…   and that is to “make it” one day, and also to get to perform with the “big names” of Rock.

For Orianthi, the latter is another dream of hers that has come to fruition on several occasions over the recent years in her professional career. And definitely, she has so many more good years ahead for her, and it would be safe to say that we haven’t yet seen the best from her.

“Blessing” from a legend

There aren’t a lot of guitarists who can say now that they were hand-picked by the late Michael Jackson to fill in the role of being the lead guitarist for one of his tours. Regardless. That the “This Is It” never took place because of the sudden passing of the “King of Pop”, the fact remains that Orianthi had impressed Michael Jackson so much after having seen a few of her performances live via YouTube, that she received an Email from the legend himself to tell her that she was the lead guitarist he had chosen specifically for what would be his ill-fated tour.

Obviously, Michael Jackson saw something special in her !

When that career changing moment happened for Orianthi, this instantly increased her “stock” and credibility among all kinds of music aficionados, and it definitely spiked interest in other veteran artists to take notice of her impressive repertoire of skills as a guitarist. And the added effect of which is that when it came to the growing list of available young and talented session guitarists to choose from, Orianthi’s name was right away included to that elite group !

From then on, she would get the chance to work with other “big names” and even a few iconic artists, such as Orianthi sharing the stage with the “Latin-Rock Shaman” himself, Carlos Santana; being the opening act for the greatest living guitar virtuoso in the world, Steve Vai, in a special event; and having a lengthy stint as the lead guitarist for “The Godfather of Shock-Rock” Alice Cooper; and so on. Orianthi’s resume keeps on growing !

Orianthi being chosen to perform alongside such institutions in the music industry calls to mind an unwritten rule that applies to every profession, and which certainly rings true in her case, that is: “You would only want to work with the best and the brightest !”. Without a doubt, Orianthi, right now, is one of the best out there in what she does !

From digging the Blues to shredding

For guitar enthusiasts, take note that for anyone to earn the moniker “The Queen of Shred” can only mean you are one of the premier female guitarists in the whole world, period. And interestingly enough, if you read up on the beginnings of Orianthi, you would see that she wasn’t originally into the heavier side of music, such as Metal and Hard Rock. She was influenced in her formative years by the Blues, a branch of Southern music, that represented the “juke and jive” of the buzzing, bustling scene of African-American inspired music in certain states of the USA.

Orianthi’s progression to shredding was all but a natural way for her to further expand her musical palette, and widen her own knowledge of the numerous styles of playing the guitar. She did not want to be “pigeon-holed” into one category or definition of who she is as a guitarist. At the rate she is going, gradually but surely, she is getting closer to becoming a guitar virtuoso herself !

I will end it there.

Orianthi’s journey into what she could ultimately be as a guitarist is not yet done by a long shot, and that is a good thing. It is because we do need more stand-out artists like her who will serve as a positive role model for the youth who will be inspired to pick up the guitar and learn how to play it.