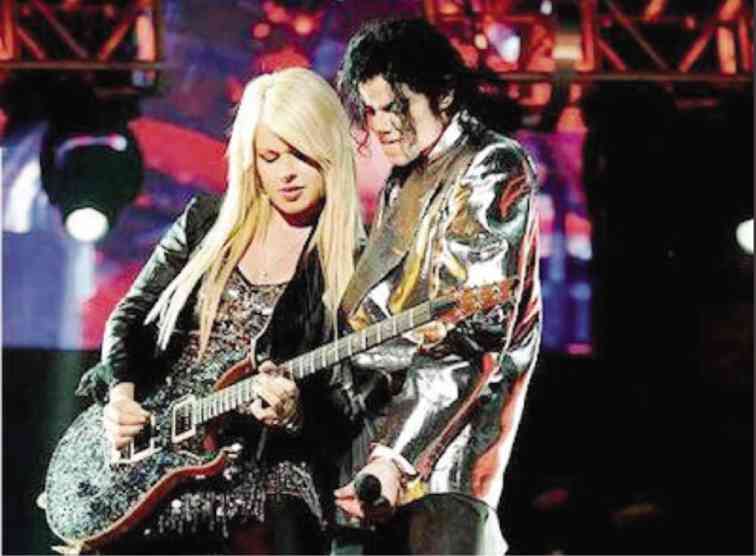 ORIANTHI Panagaris (left) kept her part in Michael Jackson’s “This Is It” a secret from friends.

It was a dream come true to meet Orianthi Panagaris, the über-fab guitarist of my idol, Michael Jackson. She appeared with MJ in the 2009 concert-documentary “This Is It.”

Aside from MJ, she has worked with such rock ’n’ roll legends as Carlos Santana, Alice Cooper, Richie Sambora (Bon Jovi) and Steven Tyler (Aerosmith).

That’s quite a feat for someone who’s only 29.

Orianthi knew when she picked up a guitar at the age of 6 that her life would never be the same. Her instant affinity for the instrument quickly blossomed into a full-blown love affair.

She will definitely strum her way into our hearts on her “Every Road Promo Tour” at Hard Rock Café in Makati tomorrow, 9 p.m.

Her name in Greek means “beautiful flower.” No wonder Orianthi is in full bloom these days.

Get to know this ultimate rocker chick, up close and personal.

“It was a life-changing experience. I did not tell anybody I was working with Michael Jackson in ‘This Is It.’ He was very supportive. He was like a kid who loved to laugh. It was hilarious whenever he got stuck inside the giant spider props.

“I learned something new from him every day. He taught me never to hold back.”

“I love working with Alice Cooper. I admire his longevity as an artist. He gives 110 percent in every show.

“I’m one of the boys, but I’m still myself. I never compromise who I am even if I’m in a male-dominated field.

“I would always hang out with Carlos Santana and Alice Cooper after our shows.

“We are one big rock ’n’ roll family. We always make sure to have fun because we only live once.”

“I’m a frustrated drummer. As a kid, I was bullied because I was a guitar player. A teacher suggested the harp, which she said was more feminine. But I had a strong calling, so I just kept going.”

“I love the guitar because it’s very challenging and expressive. I play it differently each day.

“I wish more girls would play the guitar seriously.

“If I wasn’t a guitarist, I would have been a chef. After a concert, I usually whip up pizza and vegan cookies from scratch at around 1 a.m. Then I would call my friends to come over for midnight snack.

“My advice for aspiring guitarists is not to let anyone tell you that you can’t do it.”

The awards show will be hosted by comedian Seth Meyers.