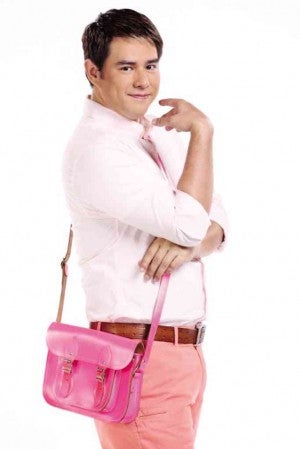 “I HAVE become feminine. My skin is smoother, my clothes more stylish.”

While malling with his family recently, GMA 7 actor Gabby Eigenmann overheard fans arguing about his gender.

“One of them insisted that I had become gay in real life,” Gabby related. Instead of getting offended, he said, he felt proud. “It meant I am effective in my ‘Dading’ role.’”

The actor has been receiving glowing notices from critics and ordinary viewers alike for his portrayal of a swishy surrogate father in the Kapuso afternoon series.

During this interview, Gabby peppered his speech with gayspeak, like kaloka or bongga.

“Dading” director Ricky Davao earlier jested that Gabby’s hands would swish this way and that even between takes.

Gabby admitted, “I’ve become more feminine. My skin is smoother, my hair is always in place, and my clothes more stylish.”

The best compliment he has so far received is from his father, acting stalwart Mark Gil, who won awards and acclaim in the past for playing gay characters.

Mark used to chide Gabby for not taking acting seriously. “He is my No. 1 critic,” Gabby said. “On account of ‘Dading,’ he told me, for the first time: ‘You’re doing a good job.’”

It meant the world to him.

Uncle Michael de Mesa, no stranger to gay roles, either, shared wise counsel with Gabby. “Tito Mike told me to be consistent in my characterization.”

Another rave review came from his 16-year-old daughter, Gabby Girl. “She told me: ‘I didn’t see you, dad. I saw your character.’”

He realized how tough it is to be a woman in the biz when he had to join a pageant in one episode. “It took three hours to do my hair and makeup. My costars said that, in drag, I looked like Jennifer Aniston, with a dash of Ara Mina, Priscilla Almeda and Rosanna Roces. My gown was tight and my stilettos were a pain.”

Gabby, who started in the biz as a singer-rapper, acknowledged that there was immense pressure to live up to the Eigenmann acting legacy.

“It’s not just because of people’s expectations,” he pointed out. “All my relatives are good actors… I also have to show results.”

He’s not afraid of being typecast as a villain or a gay man. “Like my dad, I’d like to be able to play bida and kontrabida.”

Thus, while making waves as a flamboyant “Dading,” he agreed to portray a ruthless drug pusher in “Asintado,” Louie Ignacio’s entry in the Directors’ Showcase section of this year’s Cinemalaya.

“I see myself as a character actor,” he pointed out. “My role in ‘Asintado’ is totally different from ‘Dading.’ I have no qualms… whether it’s a lead or support role. It all depends on the story.”

He couldn’t resist his part in “Asintado.” “It was my first indie movie. I couldn’t say no to Direk Louie, a dear friend. He directed me in my first TV commercial and in (the Kapuso Sunday variety show) ‘SOP’ for years. He was responsible for my music videos. I had to support him in his first indie movie.”

GMA 7 tapped Gabby to lend his voice to “Miracle in Cell No. 7,” Filipino version of the South Korean hit movie. “I watched it thrice. I cried the first time I saw it and watched it again and again. Still on the first dubbing day, I wept buckets.”

Yes, indeed, he has become a softie.