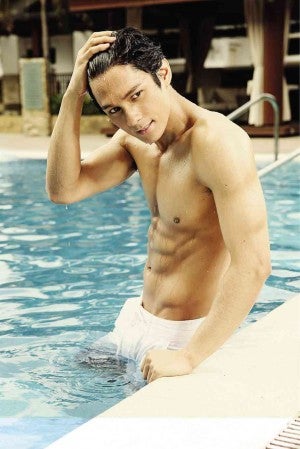 JOSEPH Marco thinks his new TV character, a grouchy but lovable dreamboat, is harder to portray. “There are many layers to him,” he says. Courtesy of Men’s Health Magazine/ Jay Tablante

Joseph Marco, rumored to have had a “gay benefactor” in his home network ABS-CBN, has gotten so used to show biz intrigues that they no longer hurt him.

“What matters is that people who are important to me know the truth,” Joseph told the Inquirer. “What’s the point of working so hard if I had someone who gives me what I want? Then I’d rather not lose sleep over work!”

How similar are you to your character Red?

We’re similar in the sense that we’re both vain. I see to it that I dress well when going out. I’m also obsessed with fixing my hair. And just like Red, I’m a loyal friend. But we differ in terms of how we handle love matters. I’m the type who fights for the person I care about.

You had to sport red hair for the film. How did that work for you?

It helped me get into character. I was excited about it for the first three shooting days, until it became a problem. Applying the color took about an hour and a half. I couldn’t sleep on the set lying down because I might stain my face. It was also very difficult to wash off. It was such a hassle, especially when I had to go straight from the movie set to the set of “Pure Love.”

Nadine and James’ team-up is fast becoming popular. Did you ever feel like the third wheel?

I honestly felt uncomfortable in the beginning. The cast members are talents of Viva Films and I was the only one from ABS-CBN. Luckily, there was instant connection… like we had been friends for a long time.

What’s your takeaway from “Talk Back”?

Direk Andoy is a cool guy, but  strict about his actors memorizing their lines. From this experience, I learned versatility, patience and adaptability.  Viewers should be able to see how my [various] roles differ. I had to be really patient when being transformed into Red—it was a tedious process.

How is your “Pure Love” character Dave a challenge, especially since you’ve already played Elai, a slow-witted boy, in “Honesto?”

People get the wrong idea that Elai was harder to portray than Dave, who is actually more complicated.

I had to attend a lot of workshops with Nonie Buencamino. The creative team saw him as someone grouchy but lovable.

He has many layers to him. I really tried to learn as much as I could from him.

Direk Roni (Veronica Velasco) said she was satisfied with my performance. Now, I hear that a lot of female viewers are crazy about Dave.

Between Red and Dave, who do you think would more easily win a woman’s heart?

That would be Dave. He may be grouchy, but he is capable of loving someone sincerely. His love is pure and unconditional.