Getting to know Sungha Jung

MANILA, Philippines – August 16 was a rainy Saturday night in Manila. The traffic jam was unimaginable and lines in taxi bays were worse than usual. But still, dedicated fans of 17-year-old Korean guitar wonder Sungha Jung exerted extra effort in going to Taguig to catch a glimpse of their idol.

The mini “meet and greet” event was held a day before his actual concert in Manila.

But before the acoustic fingerstyle guitarist went up on stage to see his fans, Jung first dropped by a restaurant around the Venice Piazza to have dinner and to chat with the Philippine media.

During the conference, the reserved guitarist who appears to stand 6-feet tall sheepishly answered questions coming from the press.

Jung, whose claim to fame was a “Pirates of the Caribbean” theme song cover, surprised everyone in the room when he revealed that it takes him only three to four hours to learn playing a new song.

When asked what was the most difficult piece he encountered so far, Jung said that he couldn’t remember all songs he has played, but as of the moment, he is most challenged with “All of Me” by Gerald Marks and Seymour Simons.

But despite his expertise on strings, teaching acoustic fingerstyle is still out of the 17-year-old’s league.

“I don’t think I can teach for now,” Jung said. However, he is not closing his doors to the possibility of him becoming an acoustic teacher when the time comes.

For now, Jung shared that he just wants his friends to enjoy his concerts and for people to continue coming to his shows.

When asked what he enjoys most when performing in the Philippines, Jung said that he likes how enthusiastic the Filipino crowd is. He also teased that he prepared something special for his fans, but wouldn’t reveal what it is “because it is a secret.” 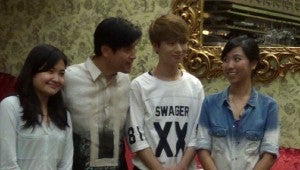 Jung also expressed interest in collaborating with Filipino artists. He said he would like to work with people from the Philippine music industry if given the chance.

Outside the music zone

Given his young age, it remains a wonder to most people how Jung manages to cope with the pressure and stress of touring.

While many, if not most, artists lack sleep while on tour, Jung revealed that he gets a lot of sleep when abroad. This, for him, is what keeps him stable amid his packed schedule.

Back home, he said he also loves playing basketball with his friends when he has the time.

Before Jung flew in to Manila for his August 17 concert in Taguig, he first played for his fans in Cebu last August 15.

From Jap DJs to Sungha Jung to John Legend