K-pop stars BigBang, 2NE1 mimic one another at YG Family concert in Seoul 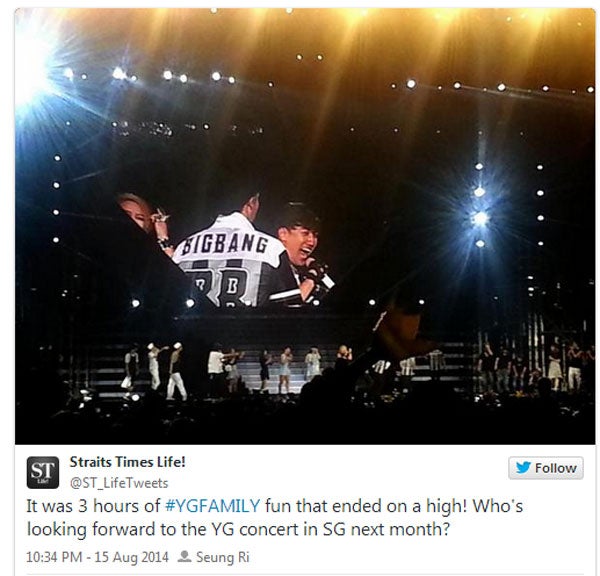 That was what Psy and his 27 fellow artists, including boyband BigBang’s G-Dragon, did at the curtain call of the YG Family concert in Seoul on Friday night.

Enthusiastic fans among the 10,000 strong crowd at the massive Jamsil Sports Complex Stadium couldn’t help but groove along too.

The collaborative performances among the eight acts under Korean entertainment giant YG, from edgy girl group 2NE1 to rookie boyband Winner, were a highlight of the three-hour show that was complete with bursts of confetti, a huge disco ball and dazzling fireworks.

The successful YG artistes have held solo concerts, such as the recent 2NE1 All or Nothing concert tour. It’s been over two years since YG held a multi-act agency concert featuring their top music acts.

The YG artists had a blast covering one another’s songs, and some to hilarious effect. 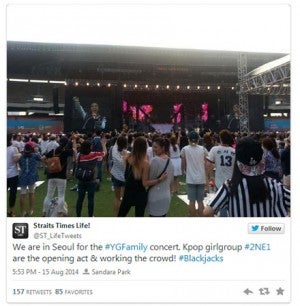 Fans had to do a double take when a G-Dragon “imposter” emerged to the beats of G-Dragon’s hit song Crayon.

It was BigBang’s member Seungri donning an afro wig mimicking one of G-Dragon’s music video looks. He was later “confronted” by the real deal when G-Dragon came onstage to join in the fun.

Another “imposter” was 2NE1’s pretty face Dara, who became Doom Dara. She adopted the look of BigBang’s TOP in his latest single Doom DaDa, complete with a huge mike prop slung across her back.

Singapore fans can witness the chemistry among the YG stars when the YG Family concert heads to Singapore next month.

The YG Family 2014 Galaxy Tour: Power In Singapore will be held on Sept 13 and 14 at the Indoor Stadium, and will be the only stop in South-east Asia.

What can fans expect at the Singapore stop of the YG Family concert?

2NE1’s leader CL told Life! backstage before Friday’s concert, she said with a glint in her eye: “It’s a surprise. You’ll have to come and see. It won’t be fun if I told you.”

2NE1 went all out in Manila, left fans nothing to regret

There’s no stopping the Kpop Republic