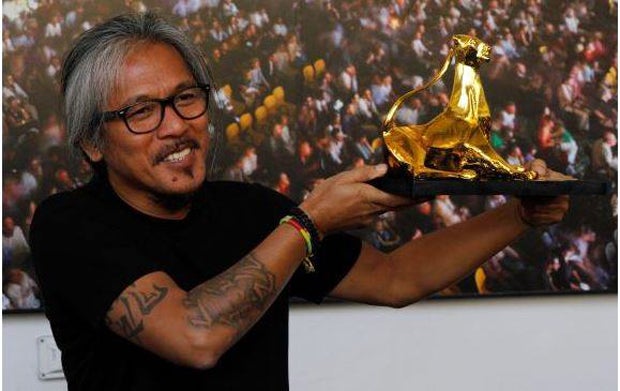 Lav Diaz showing the trophy of his recent masterpiece “Mula sa Kung Ano ang Noon (From What Is Before)” for winning the Golden Leopard (or Pardo de Oro) in Locarno International Film Festival in Switzerland on Thursday. CONTRIBUTED PHOTO/Sailas Vanetti

Diaz’s film won the Golden Leopard (or Pardo de Oro) in the fest’s main competition. Locarno is considered one of the top 14 film festivals in the world, along with Cannes, Venice and Berlin.

Diaz, who attended the film fest in Switzerland, told the Inquirer in an email interview, that he dedicated the honor to the country: “This award is not just for me; it’s for Philippine cinema.”

According to the Locarno web site, the film won a cash prize of 90,000 CHF to be shared equally between the director and the producer of the Best Picture.

Diaz’s film also brought home the Fipresci prize, which is handed out by the International Federation of Film Critics—an organization of movie experts and reviewers. 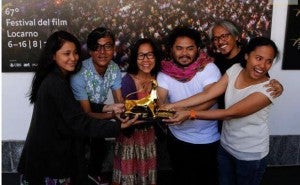 The cast and crew of Diaz’s “Mula sa Kung Ano ang Noon (From What Is Before)”. CONTRIBUTED PHOTO/Sailas Vanetti

On the Locarno’s official web site, five critics singled out Diaz’s film as their “favorite” in the festival: Emanuele Sacchi of MyMovies.it, Tereza Fischer of Filmbulletin, Antonio Mariotti of Corriere del Ticino, Ugo Brusaporco of La Regione and Stéphane Gobbo of L’Hebdo.

Read the full story in Sunday’s edition of the Philippine Daily Inquirer ePaper.