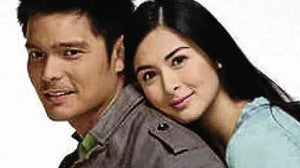 Last Saturday, Aug. 9, we watched Marian Rivera’s dance show on GMA 7, to see if its performance numbers had improved in terms of “degree of difficulty.” Thus far, the new show has failed to measure up to the high level for local dance shows set by past program hosts like Charlene Gonzales and Dayanara Torres.

Well, Marian’s opening dance number was more of the desultory same, so we prepared ourselves for a humdrum viewing session. But, yikes, were we wrong!

It turned out that something different, unexpected and truly special was going to happen that night, and it had nothing to do with dancing: Aug. 9 was the day that Marian’s five-year beau, Dingdong Dantes, decided—very publicly, on national TV, no less—to ask his lovely girlfriend to marry him!

Everybody in these hyper-romantic parts loves a wedding—and a marriage proposal!—especially if stars and iconic lookers like Yan and Dong are involved.

So, when Dingdong went down on one knee, took a deep breath and “soulfully” proposed to Marian, all happy heck broke loose! It was just like in the movies—no, better, because it was actually happening to two real people, who “just happen” to be TV-film stars!

A viewer wondered why the proposal had to be “so public,” but it shouldn’t be a surprise, because that’s how local stars have been habituated to live—95 percent in full view of the traditional and “new” media—because their fans feel so close to them that they expect and prefer to be treated “like family!”

Also, let’s face it, stars need to keep their careers and lives constantly eventful and “trending,” so a stellar marriage proposal perforce has to “go public”—to do otherwise would be a monumental waste of headline and “breaking news” opportunity,  unless the stars are absolute sticklers for privacy—and, how many of those do we have around?

In any case, most viewers didn’t object to the ultra-public nature of the stellar proposal. In fact, they welcomed it as a communal opportunity to celebrate Love in its most idealized expression and manifestation!

Yes, Dong really wants Yan to marry him, have beautiful babies and grow (still photogenically) old together—but, the fact that they look so good and are so popular and blessed with all the perks of stardom made the stellar proposal more inspiring and exhilarating than most, and a rare opportunity for the “ordinary” likes of you and me to “empathetically” savor the intoxicating sweetness of romantic pluperfection!

The reality couldn’t possibly be as perfect as the stellar romance has been projected and showcased in the media, but everyone is entitled to his half-hour of “reality-based” fantasy, right?

What could possibly top that inspiringly exhilarating stellar proposal? Why, the stellar wedding, of course—so, Dong has his work cut out for himself to come up with a dream wedding to top them all—and possibly end up as the loveliest, most luminous and perhaps most lavish stellar nuptials—of the decade!