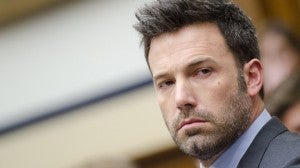 LOS ANGELES — Hollywood actor-director Ben Affleck said Tuesday he was “heartbroken” by the apparent suicide of his “Good Will Hunting” co-star Robin Williams.

Williams, 63, was found dead with a belt around his neck Monday at his home outside San Francisco, police said, stunning his worldwide legion of fans and colleagues.

“Heartbroken. Thanks chief – for your friendship and for what you gave the world,” said Affleck on his Facebook and Twitter accounts.

“Robin had a ton of love in him. He personally did so much for so many people. He made Matt and my dreams come true,” he added, referring to Matt Damon, another “Good Will Hunting” star.

“What do you owe a guy who does that? Everything. May you find peace my friend. #RobinWilliams.”

Williams won the best supporting actor Oscar in 1998 for his portrayal of a college professor in “Good Will Hunting,” directed by Gus Van Sant.

Affleck and Damon also won an Academy Award for its script, which they co-wrote.

The film — with Damon in the title role as a self-taught math wizard — launched the duo’s Hollywood careers.

A park bench in Boston that appears in “Good Will Hunting” was among many sites associated with Williams’ movies that fans turned into shrines to the beloved thespian.

Robin Williams an airman, genie, nanny, but one of a kind—Obama