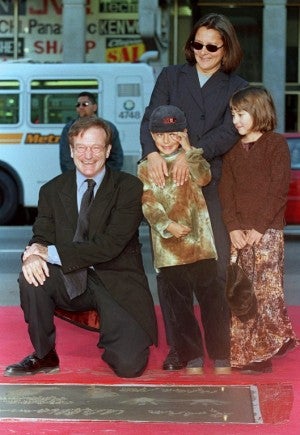 A file picture taken on Dec. 22, 1998. shows Academy Award-winning actor Robin Williams with family members Cody (center), Zelda (right) and former wife Marsha during Williams’ hand and footprint ceremony outside the world-famous Mann’s Chinese Theatre in Hollywood, California. The star of films such as “Good Will Hunting,” “Good Morning Vietnam” and “Mrs Doubtfire” was found dead at his home in Tiburon, in California just north of San Francisco, shortly before midday on Aug. 11, 2014. AFP PHOTO/VINCE BUCCI

This was during an interview just a few years back when, I also remember, Robin cracked in reply to my question about his wife Marsha Garces, “She’s Finnipino. You get lechon with white fish.” On the spot, Robin had coined that term for Marsha’s Filipino-Finnish heritage.

“Balut! Balut!” Robin suddenly yelled in another interview. And at the end of yet another exchange, the actor-comedian hollered in my direction, “Salamat!”

Most comedians are quiet and serious in person, some even boring. Not Robin. He was warm and friendly—he put on a one-man show for you. He was a great mimic, so those Tagalog words sounded absolutely authentic.

Thus, the news of Robin’s passing on Monday in California made me very sad. I actually shed a tear.

There was nothing generic about my encounters with the man. Each one was a laugh-a-thon, with the irrepressible actor often standing up to act out anecdotes, and in various accents at that—French, Australian, Italian and, yes, Filipino.

“He was a great man,” Robin fondly said of Leon Garces, who died March 2002 in San Francisco, California, at age 92.

Once, I asked if his kids with Marsha, Zelda (born 1989) and Cody (born 1991), kept in touch with the Filipino side of their family. Robin said, “Big time, because of Marsha and Leon, who was amazing.”

(Leon was from Bohol province. He migrated to the United States in 1929 at age 20 and served in the US Navy during World War II. He married Ina Rachel Matilla and settled in Milwaukee, Wisconsin, where Marsha and her two sisters were born. In the last years of his life he moved to Phoenix, and then California.)

Robin had another son, Zachary, with his first wife, Valerie Velardi.

Aside from winning an Oscar for best supporting actor for “Good Will Hunting” (1997), Robin clinched six Golden Globe trophies, including a

Asked about his most memorable moments at the annual Globes presented by the Hollywood Foreign Press Association, Robin dished, “The year (1991) that Gerard Depardieu won—and he was pretty hammered—and he said, ‘I want to give (name withheld) a big wet kiss.’ I went, at that point, ‘Forget gay wedding, that’s the moment I want to see.’ And obviously, (in 2003) when Bono said, ‘This is really, really f***ing brilliant.’ I was like, ‘Yes!’”

I will certainly miss our animated conversations. In an interview for “Happy Feet 2,” where he voiced two penguin characters—Ramon, the incurable romantic, and Lovelace, the guru—he became very excited when he talked about Sofia Vergara, who provided the voice of Carmen, a statuesque, beautiful penguin being courted by Ramon.

“When you record for animation, most of the time you are alone,” Robin started. But, he said, director George Miller encouraged group recording sessions, so the talents could truly interact with each other around the microphone. “When Sofia was in the same room, it went really well,” the actor said, uttering the last word with exaggerated trembling. “You see her on TV and all of a sudden, she’s there in person and she says, ‘Okay, baby, please.’ It gets pretty wild. She’s really beautiful and funny.”

Asked which animal came closest to representing his qualities, Robin replied, “The dolphin, since I have been with dolphins. But, other people might say the monkey. I was actually hit on by Coco, the gorilla. She tried to take me in the back of a room. The trainer went, ‘If she takes you back there, I can’t help you.’ But, I think it’s the dolphin more than anything, because of its playfulness, sexuality and intelligence. I would love that. So, either that—or a great or reasonable ape.”

That’s how hilarious our exchanges could get.

Robin was even more spirited when we talked about Susan Schneider, whom he married in 2011. He virtually acted out all the following anecdotes about their honeymoon in Paris.

“It was lovely,” he began. “We had a suite at the top of this hotel, like the Toulouse Lautrec suite. It was this tiny room where you expect a bellman (Robin stood up and pretended to be the Hunchback of Notre Dame) to say, ‘Bonjour. Ca va? I will pull out your bed for you. Your first time at the Notre Dame? I’ll take you back in a moment. I will put back the bed once I go out. I must ring the bell for service. Ding!’ There, I just encapsulated my honeymoon!”

Robin continued, “We went to a restaurant and all of a sudden

—look! There’s a table of four people and a cat sitting on a chair. (He sat up like a cat, regally). What’s going on? The cat wasn’t even on the menu. I went, ‘Did you order the cat? Do they serve cat stuffed with mouse?’”

The actor, who collected comic books, related, “You walk into a comic-book store in France. You buy comic books, and you go (his eyes went large), ‘Oh, wow! These are for adults!’”

Asked if he sampled Gerard Depardieu’s wines while in Paris, Robin quipped, “I didn’t. I know that he makes them but, as a former alcoholic, I can’t. It’s too late. That’s a bit like Gandhi running a delicatessen.”

Before he met Susan, Robin was asked what qualities he sought in a woman. “Cougar?” he said. “No, more of a mountain lion. Somebody who’s not afraid to mount the lion.” Abruptly, he changed gears. “No, so far this has been very quiet for me. I live in Northern California, where it’s even quieter (he is originally from Chicago, Illinois). I can go out and people just go, ‘Oh.’ They don’t go, ‘Oh, it’s you.’ I can blend in nicely.”

He loved driving his Land Rover Defender around his neighborhood, he said. “It looks like a safari wagon. It looks like there should be lion s**t on the wheels. Occasionally, I drive my wagon, a Mercedes that looks like it had sex with an SUV. Most of the time, I’m on my bikes. I’m supposed to be getting this new electric car called Aptera, which is pretty crazy, but it will be interesting with that 100-foot cord. You can go, ‘Can I plug in my cord?’ ‘No, but you can sleep with my daughter.’”

He underwent an aortic valve replacement surgery in 2009, and loved to joke about the bovine valve that he got.

“It’s weird,” he said. “After you go through heart surgery, you get very emotional. For a while, I felt that, instead of a valve, they gave me a tiny vagina. Actually, I got a bovine valve, which has made it hard to eat meat, because it’s like, ‘You’re one of us now!’ After over four months, it seems to be working. When you’ve just had open-heart surgery, you do get this idea of a second chance.”

He was really just saying how grateful he was. “I was thinking, if they offered me a mechanical valve, I could get the new Apple iHeart,” he quipped. “It comes with applications—50,000 songs in the heart rather than out. It’s working. I’m cycling again. It’s that thing—it’s me 2.0. You come back from surgery thinking you’re grateful for everything, like breathing and appreciating all the people who wrote letters.”

But the jester was irrepressible: “It would be great if you could have cash for old clunkers like old organs. Or maybe go to that rabbi in New Jersey who was selling livers: ‘How much for the heart?’”

On the press line for the premiere of “Night at the Museum: Battle of the Smithsonian” in Washington, Robin cracked that, since he got a cow valve, sometimes he had the urge to eat grass.

As for appearing nude in “World’s Greatest Dad,” the famously hirsute actor joked, “They had to shave me, and there were animal rights issues. We could make a nice sweater out of the pile.”

Asked who the next Robin Williams might be, he once said, “Among American comics, there’s a guy named Patton Oswalt, who’s amazingly funny. He just makes me laugh so hard. In political comedy, there’s this kid named Jamie Killstein, who’s amazing.

“There’s also a guy named Louis C.K. He has a show on television called ‘Louis,’ which is the closest thing to watching a [John] Cassavetes comedy. It’s funny and sad at the same time. He did one episode where there was this kid named Doug Stanhope. Doug talks about suicide in a brutally honest way, but it’s also funny at the same time.

“There’s Chris Rock, too. There’s a lot of them out there.”

When he turned 60 in 2011, the hyper-energetic comedian was asked if he felt wiser. He replied, “I feel wiser… when I remember. Do you feel wiser when you have moments when you go, ‘What’s your name again?’

“There is that moment, too, when you’re like, ‘Yeah, I’m 60. Do I feel 60? No, but sometimes, I do have that moment where you have that lapse—like today. I couldn’t think of the guy who animated Wile E. Coyote. I kept thinking, Chuck Close? (It’s Chuck Jones.) That’s the only thing that frightens me. I don’t want to feel like it’s slipping. There are these great people in my life. I appreciate those who are still here even more so. You miss the ones who have gone on. You just keep going.”

I will miss Robin. I thought guys like him, with that level of zest and capacity for cheer, would go on and on. For the many funny memories, maraming salamat, Robin Williams!