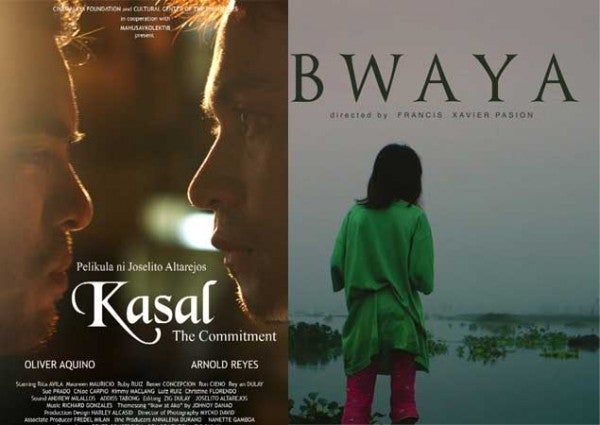 MANILA, Philippines–The films “Kasal” and “Bwaya” on Sunday won the top awards at the Cinemalaya 2014 awards night held at the Cultural Center of the Philippines.

During his acceptance speech, Altarejos said he always makes gay films because those were stories that should be told. “Look where it brought me,” he proudly said as he accepted the award.

Pasion, for his part, thanked those who helped him create “Bwaya,” which was based on actual events about how a mother and the rest of the community in the marshlands of Agusan del Sur came to grips with a crocodile attack.

Among the highlights of the night was Nora Aunor’s winning the Best Actress award for Joel Lamangan’s “Hustisya.” Still feeling slighted by her exclusion from the latest list of national artists, supporters of the veteran actress, who’s known as local filmdon’s Superstar, kept on calling her their “national artist.”

Receiving the Best Film award for the Short Film category was “Asan si Lolo Me” by Sari Estrada. However, it was Kevin Ang’s “Lola” that won the Audience Choice award, Best Screenplay and Best Director.

Special Jury Prize: The Ordinary Things We Do by David Corpuz

Nora Aunor: Posting of films on YouTube by Cinemalaya tantamount to stealing