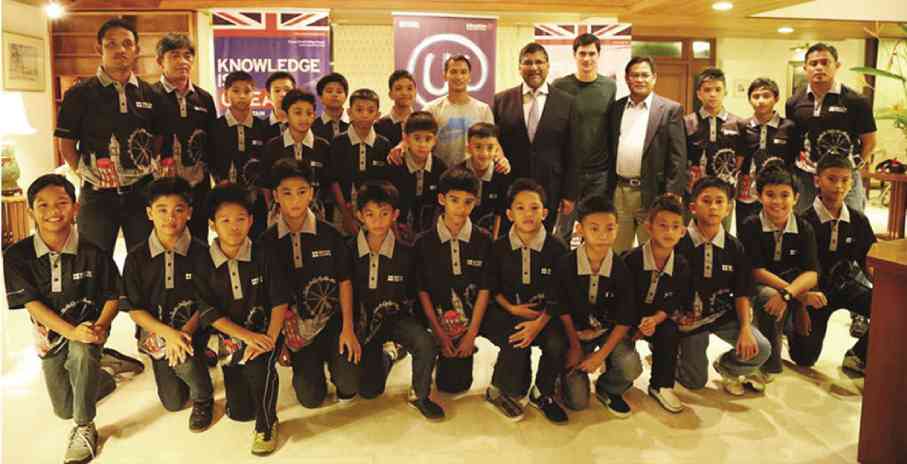 LITTLE Azkals and their mentors. PHOTO FROM littleazkals.com.ph

After years of struggling to get widespread support, the men’s national football team, the Azkals, has become one of the biggest beneficiaries of corporate sponsorships in Philippine sports.

Its 2010 quarterfinal win over former champion Vietnam in the Asean Football Federation Suzuki Cup boosted interest in the sport and made private and corporate sponsors take notice.

The Philippine Football Federation hopes to capitalize on the Azkals’ success and generate the same support for the under-11 national pool.

Tonight at 10, a two-hour documentary produced by Spears Activation and written by Booma Cruz airs on ABS-CBN.

“Pangarap Kong World Cup” follows the games and training of 22 kids selected from tryouts held in different parts of the country. Many of the team members come from underprivileged backgrounds; only six are from the National Capital Region.

In the documentary, the young Azkals will be shown playing against British teams from the same age group. The British Council and Pru Life UK sponsored the team’s trip and training in Loughborough University in Leicestershire, UK, last year.

Members of the men’s national team were interviewed about their World Cup aspirations.

PFF technical director and former national team coach Aris Caslib explained that “Pangarap” would help build on gains realized and show the support extended by the British Council and corporate sponsors to the Philippine team.

Caslib added, “The TV special opens the door for football to realize that other people—the British Council, ABS-CBN, Probe Team, and other sectors—believe that a long-term football plan is accepted by respected people in society.”

British Ambassador to the Philippines Asif Ahmad said the docu reveals the incredible journey of the young footballers, from the tryouts to their UK training. “It is quite dramatic. The title ‘Pangarap Kong World Cup’ really says these kids can aspire to play in the highest level.”

He added, “The [young Azkals] realized, at the end of the day, that they were as good as these kids from the UK, where they were exposed to playing in school, etc. The fact that they lost only twice, gave them huge courage.”

The team’s formation is part of the PFF’s long-term program to create a national pool that could qualify for the 2019 U-17 World Cup. The UK trip is the first training program sponsored by the British Council in the Philippines.