Clint Eastwood’s ‘Jersey Boys’ is a joy to watch 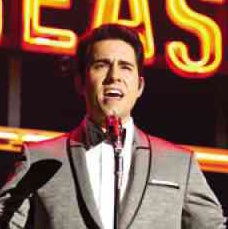 At first glance, Clint Eastwood would seem to be an awkward fit to direct the period musical film, “Jersey Boys.” Yes, at age 80, he’s quite “period” himself—but, singing and dancing? That seems to be a whole world away from his more characteristic screen output, like dramas about cowboys and athletes and such.

—But, come to think of it, early in his performing career, Eastwood did costar in a musical film, “Paint Your Wagon,” in which he quite uncharacteristically but passably performed some musical numbers with Lee Marvin and Harve Presnell.

In any case, the unexpected decision to tap Eastwood to direct “Jersey Boys,” a film about vocalist Frankie Valli and The Four Seasons, has turned out to be an inspired move, because the finished film is not just a pleasure but an outright joy to watch.

Eastwood is copacetic with the movie’s plot, situation and theme, because he’s all too familiar with the nitty-gritty world of New Jersey in the ’50s, with its unique combination of postwar street smarts, crime and emerging musical trends, a “combination” wave that the Four Seasons rode to its very crest.

Most of the singing group’s members were minor hoods who kept getting in and out of prison, and their love for music was their way out of their rough and ready hometown’s crime scene. It’s the nitty-gritty of the locale that Eastwood is able to knowingly and convincingly  depict.

As for Valli himself, he’s first introduced to us as a midteen barber’s apprentice who has a most unusual high falsetto—that fortuitously turns out to be exactly what the simpering, mewling love songs of the period are looking for!

The pop songs then were dolorous anthems about love lost and pined after, with male vocalists piteously pleading with the loves of their lives to give them one last chance—!

In any case, Valli’s uniquely “beseeching” voice and its high register eventually enabled The Four Seasons to get into the bigtime—but, their troubles weren’t over, because their nefarious past often compromised their eminently prosperous prospects.

Basically, even as their financial situation improved, they were still warped by their ineptness at sustaining healthy and loving relationships, thus making their loved ones miserable.

Valli himself had to eventually contend with the death of a beloved daughter, who was ironically headed for a promising performing career of her own.

Despite these and other thematic low blows, “Jersey Boys” is an exceedingly “fun” film to view, especially for seniors who know the more pristine if more simplistic time whereof it speaks—and sings!

Quite often in the course of the movie, we catch ourselves smiling from the sheer delight of the high musical and cinematic level that Eastwood and his cast and crew are able to sustain.—You can’t get a warmer endorsement than that.

As for the performances in the film, they are paced by John Lloyd Young’s portrayal of the gifted but troubled Valli, and his similarly “hounded” and coopted musical pals. Even more impressively, the lead cast is made to age to senior status in the course of the storytelling, and they handle that additional thespic requirement really well, too.

—And, above it all, there’s the pop and rock music of the ’50s and ’60s that makes the songs in the movie not just this one film’s musical repertoire—but virtually also the soundtrack of our very lives!