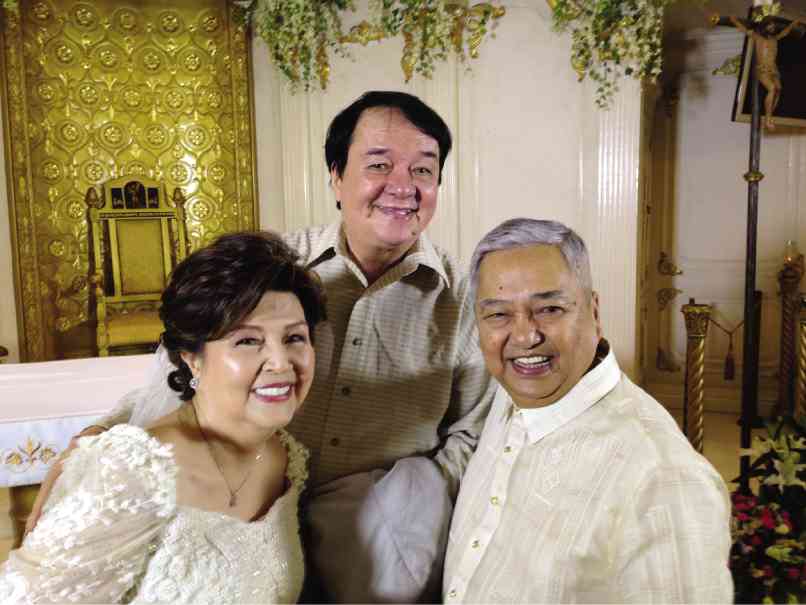 BOOTS and King with kibitzer and resident curmudgeon NUT at the love-ly couple’s nuptials. CHIQUI ROA-PUNO

Our essay on the wedding of Boots Anson Roa to King Rodrigo got a lot of feedback, including a note urging us to do more pieces about topics not directly related to entertainment and the arts.

But, the best and most appreciated reaction of all has come from Boots herself, who said she felt emotional upon reading our essay. Well, her heartfelt response made us all all sniffly, in turn! Here’s Boots’ reaction, in full:

“Dear NUT, I did not cry on my wedding, but tears welled in my eyes and threatened to fall as I read your moving piece. Thank you for defining our love and marriage to your readers in a way neither we nor others have successfully done. All I could say in agreement was ‘Yes, that’s exactly what I meant!’ I’m sure King feels the same way. We love you.” 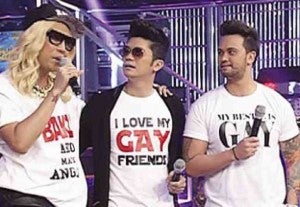 Our recent article on stars who “say it with T-shirts” elicited requests for more examples of luminaries who promoted their advocacies or made known their stand on issues by way of the one-of-a-kind “message shirts” they wore. Happy to oblige, here is a photo of the hosts of “It’s Showtime” sporting progay shirts.

For its part, our article last week on “ Eat Bulaga’s” “Suffer Sireyna” tilt for “outrageously ugly” gays has elicited a tsunami of reactions for “hitting the nail on the head” and “exposing” the “negative showcase” for the “worst exponents of gayhood,” “encouraging disrespect and even hatred” for members of the third sex.

However, some went on to say that the article didn’t go far enough, pointing out that it was “intentionally insulting” that winners of the tacky competition “won” only a few hundred pesos, and even a stack of firewood! Contestants were paraded as “freaks” to be laughed at—and yet looked down on.

It was further noted that some of the gays were “the poorest of the poor,” and thus looked down on even by other gays—an untenable and unhealthy situation that shouldn’t be encouraged, because gays need to be “united in the common struggle” for respect and equal treatment.

Definitely, “Eat Bulaga” should rethink its derisive version of a “beauty” competition, and viewers who enjoy watching it should similarly ask themselves why  they’re having such a cluelessly good time—and, at whose expense?

Another reader, obviously a Noranian, says that UP’s decision to award this year’s Gawad Plaridel to Nora Aunor bolsters her “K” or karapatan (entitlement) to be made a National Artist, if not this year then sometime soon.

It’s interesting to note that some years ago, Vilma Santos was similarly honored (and Inquirer’s Eggie Apostol before her). So, another reactor opines that Nora has finally “caught up” with her “traditional” rival.

Truth to tell, however, the two stars are good friends in real life, so all talk of “rivalry” is really between their separate and competitive groups of “diehard” fans.

Well, at least things aren’t as inimical and toxic as they were decades ago, when some Vilmanians and Noranians engaged in heated and pungent verbal and physical exchanges that made some shocked onlookers wonder what the world was coming to—!

A reader agrees with Joseph Mabilog that more independent TV producers are needed to boost important youth-oriented advocacies on television. They don’t need to get into an expensive major channel, a more inventive use of the Internet, social media, mobile phone streaming and other newfangled methods will make such indie TV productions possible—at much less cost.

On “The Voice Kids,” a reader seconds the motion that some if not many of the “selected” contestants are potently not really kids anymore and thus are too old for the “kiddie” tilt.

A promo blurb for the show even specifically describes it as “the battle for bulilits”—so tweens and teens, no matter how talented, are obviously out of place. —So, why encourage them to hope and dream? They should join other, nonage-specific singing tilts, instead!

On stars who have put on much too much weight, LJ Somes opines, “Obese celebrities shouldn’t resent it when concerned fans nag them to lose all those unwanted pounds. Aside from health issues, their careers are sure to suffer if they don’t look as good as they used to.”

On Bea Alonzo’s strong showing on “Sana Bukas Pa Ang Kahapon”: “Bea’s effective performance has added to her already glowing persona as one of our best actresses. Star Cinema should follow up with a film that will focus on Bea’s ability, instead of her having to share the screen with other actresses (like “Four Sisters and a Wedding” some years ago).

For his part, Bill Cosingco wants to get updates on “forgotten” stars like Marlene Dauden, Pepito Rodriguez and Babara Perez.

Well, last we heard, Marlene was in the States with her family. As for Pepito, we caught up with him at the wedding reception for Boots and King at the Wack Wack Country Club. And  Barbara is definitely not “forgotten,” since she still appears on TV every now and then!