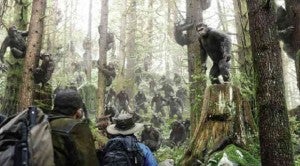 SCENE from “Dawn of the Planet of the Apes”: It benefits from seamless special effects, resulting in busier, more hyper-real scenarios

The latest installment in the prequel/reboot series, the Matt Reeves-directed film works well in enhancing the decades-old mythology, first introduced in the 1963 novel “La Planete des Singes,” and translated later to the first “Planet of the Apes” film in 1968.

In “Dawn,” much has happened to the world, a full decade later. The intellectually evolved Caesar (motion-acted and voiced by Andy Serkis) is now leader of a peaceful tribe of apes, simultaneous to the decimation of the human race by a relentless virus.

Human survivors in San Francisco, led by Dreyfus (Gary Oldman), seek to restore power in the city. A small team is sent to the California wilderness, where a hydroelectric dam is situated, and where Caesar’s tribe lives. Man and ape grudgingly cooperate and compromise, but some members of each group are just antagonistic and untrusting, which predictably leads to disaster.

There is much to appreciate, drama-wise, as the human family tasked with working in ape territory gives the film some dimension. Jason Clarke, Keri Russell, and Kodi Smith-McPhee portray weary survivors who bond with the non-humans well. But just as dramatic are the main ape family members—Caesar fathered two sons with an ailing female. Their travails are surprisingly just as relatably human, their ordeals terribly affecting.

The theme of family is wisely utilized and explored; flashing back via video recording to Caesar’s younger days (with James Franco’s fatherly character) at one point, the film connects to its predecessor’s focus on father-child dynamics, replicating much of the pathos with “Dawn’s” new rapports.

It is elating to see Caesar as a mature, progressive, sympathetic leader, just as it is exciting to see his primitive culture advancing in undreamed-of ways—we root for him and his loyal compatriots, despite the fact that these events all lead inescapably to their kind inheriting the Earth.

Reeves, no stranger to wrangling “real” and fantastical elements—he directed the horror-drama “Let Me In” and scifi flick “Cloverfield”—handles the primate politics of “Dawn” with precision and texture, making its chaotic flashpoints especially grand and epic.

TAGS: Dawn of the Planet of the Apes, Entertainment, Matt Reeves, Movies, review