Boots and King: To love again 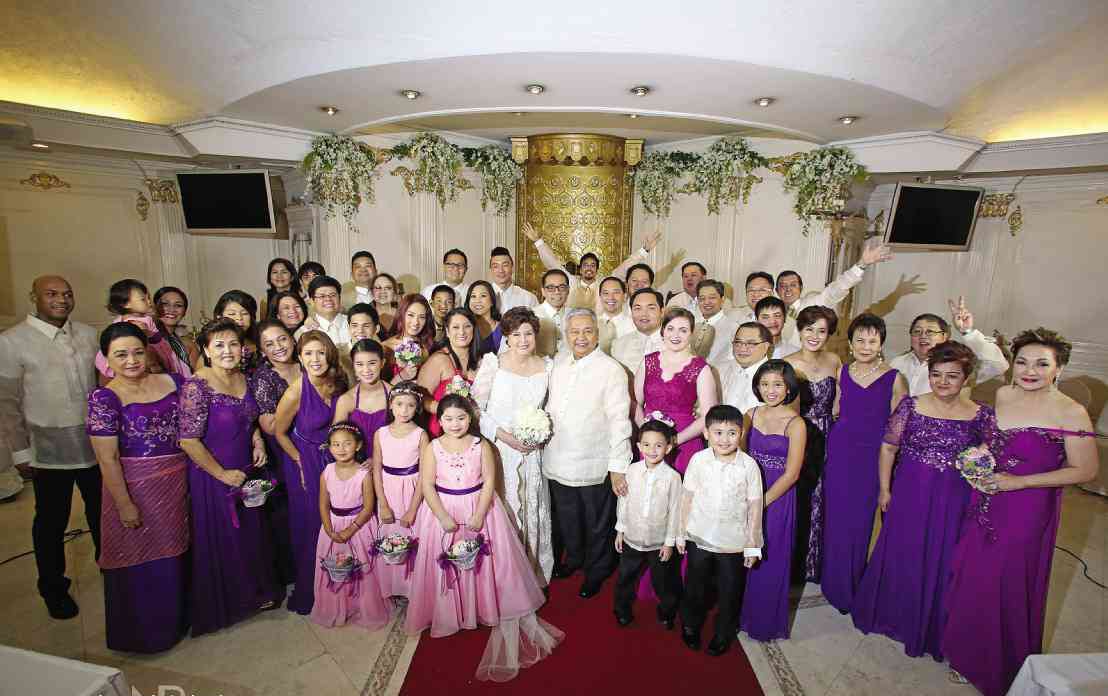 HAPPY union not just of bride and groom, but of their two families! PHOTOS fromwww.niceprintphoto.com

Most weddings are exclusively about the bride and groom—their love for each other, their ardent desire to make a life together, have children, help one another develop their full potential as productive, creative and loving people, and (hopefully) grow old together, surrounded by their grateful children and grandchildren.

In the case of Boots Anson Roa and King Rodrigo, however, that traditionally hopeful template for lifelong happiness has been tweaked in many different and significant directions—and it’s both instructive and inspiring to count the ways!

First, right after the wedding rites for Boots and King at the Archbishop’s Palace in Mandaluyong City, we conducted an informal survey of the people present—and, for practically all of them, it was their first time to see a 68-year-old widow and a 75-year-old widower get hitched!

Somebody recalled being present at the wedding of a septuagenarian to an “old maid” in her 50s, while another wedding guest said he witnessed the nuptials of a mature widow to a decidedly younger man. But, a sexagenarian getting married to a septuagenarian? Most unusual!

The “maturity factor” accounts for the exceptional excitement and delight that has surrounded the Boots-King nuptials. The traditional “logic” goes this way: Since widow Boots and widower King are already in the “twilight” of their years (obviously, they don’t agree!), they should, like many other people “advanced” in age, just love one another “platonically”—or not!—but, without taking the “official” step of getting married in church rites. 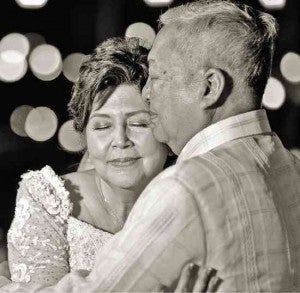 That may make “sense” to some people, but King and Boots’ friends know that it would be most unlikely for them to agree to that facile and convenient arrangement. Both of them hear mass daily and value their faith above all else, so living and loving together without the benefit of the Church’s official blessing would be an unthinkable prospect for them!

Yes, it’s possible that they may not have many decades left together, but however long or abridged their allotted “time to love” is, they are determined to savor it not just in each other’s but also in God’s embrace.

In making that firm resolve, it’s inspiring to see that the couple’s personal decision has had such wide reverberations. Due to their example, other widows, widowers, “old maids” and “old modes” have been reexamining their own “limiting” views on mature love—and, like King and Boots, have been “reconsidering” their own options and prospects for “extended” love and happiness!

Best of all, even young people have expanded their understanding of the meaning of love and happiness itself! If even septuagenarians can confidently start a fresh and “lovingly-renewed” chapter in their lives and heart of hearts, this underscores the power and passion of love as a practically inextinguishable life force that shouldn’t be made to wither on the vine in our “mature” and even “aged” years.

It should be allowed to continue to express itself with renewed vitality as it sees fit in different people, at their own pace, without setting limits that artificially inhibit its renewed flowering. Yes, mature newlyweds may have “realistic” considerations like reduced physical ability and illness to consider, but these shouldn’t be made to artificially get in the way of the renewed expression of love.

It’s inspiring to see how this expression in maturity can teach people of all ages valuable lessons about the nature of love itself. All too often, it’s believed that love is for the young and passionate, and when the physical ardor ebbs and wanes, romance should taper off into dutiful, ah, companionship.

But, some mature people debunk this delimiting “rule”—including an old friend of ours, who recently shared with us that she once espied her even more “ancient” parents in full, passionate cavort!

How bracing and inspiring that King and Boots’ recent wedding calls such “unlimited” images to mind, pushing back even young lovers’ parameters for how their own romantic and passionate prospects should pan out in the years and decades ahead!

If love is practically limitless, it must be much more potent and powerful than previously surmised, so we should less timidly go where it naturally chooses to take us, because it’s encouraging us to fully express our boundless humanity.

Less “passionately,” the unusual example that Boots and King have set is delightfully instructive because, after their wedding, the newlyweds haven’t stopped smiling! All of their photos and videos show them endlessly grinning from ear to ear, like they’re fit to burst! We have to remind ourselves that she’s 68 and he’s 75. —When was the last time you saw “seniors” looking so happy? Would that we could all look and feel like that!

Finally, let us all learn from this experience with “extended” affection and ardor that our time to love shouldn’t be measured in seconds or decades— but, by how we generously “spend” and share it!