The road to Cinemalaya Year 10 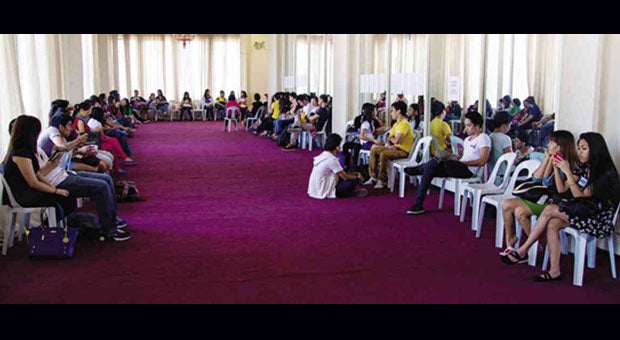 ASPIRING actors patiently wait for their turn to audition at the Silangan Hall of the CCP.

On the first day of auditions for Cinemalaya 2014, the roads leading to the Cultural Center of the Philippines (CCP) were made more daunting by several gridlocks.

GMA 7 actress Chynna Ortaleza walked from Malate. Luckily, she arrived at the audition venue, the MKP Hall, half an hour before the 10 a.m. start.

Chynna happily met up with friends Ryza Cenon, Annicka Dolonius and Ehra Madrigal in the queue.

Roy and Chynna were early birds, yet many others had come ahead of them, so they did not get to perform before the panel until after lunch.

Yes, the line was that long.

The number of aspirants who turned up for the two-day tryouts (March 1 and 2) totaled 1,062—858 adults and 204 kids—the highest in the independent film festival’s 10-year history.

Out of the box

Enzo said he auditioned because he wanted “to take part in the country’s most popular indie film fest and find roles that are out of the box.” He added, confidently, “Cinemalaya can help me attain my goal of becoming a good actor.”

Ehra agreed: “This is my chance to try something different… from the usual sexy roles I play in mainstream projects. I am open to anything.”

“Interesting people showed up this year,” Flor related. “There are a lot of good-looking wannabes. Apart from TV stars, lots of advertising talents, students and theater actors tried out as well. We saw some veterans, semi-retired actors.”

Via, who brought her 10-year-old son along, told the Inquirer , “There’s no harm in trying. I was away for over a decade, raising my son. I just recently came back in an indie film, ‘Pagari.’”

Stand-up comic Frida Nepomuceno, daughter of master mimic Willie Nepomuceno, auditioned on a whim. “I accompanied my friend, a stage actor. But I thought I might as well try.”

Although Frida usually impersonates controversial celebrities like Kris Aquino and Janet Napoles in comedy sketches, she was asked to do a dramatic monologue by the panel, which consisted of the directors and production staffers of this year’s entries.

Former Orange and Lemons’ vocalist Mcoy Fundales queued up, too, with his pals. 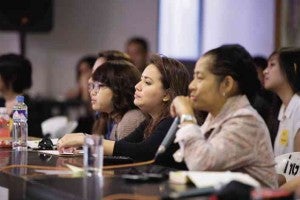 “Not a few auditioned because they were curious to see how Cinemalaya selects its actors,” Flor said.

There were several foreigners—including a German and an American in their 50s.

Also spotted were Cinemalaya repeaters—who appeared in previous editions of the fest, and yet didn’t mind slugging it out with newbies.

Flor told the Inquirer that she hoped the auditions would yield precious finds—as in previous years.  “We’d like to discover newcomers who will go on to win awards.”

Flor remarked: “It’s Cinemalaya’s 10th anniversary, and this is our biggest turnout yet. It’s proof of the public’s awareness of the festival, which continues to grow. Many actors dream of being part of the Cinemalaya family. Actors came all the way from Batangas, Laguna, Cavite, Quezon and Pampanga, hoping to land a role.”

The horrendous traffic didn’t stop any one of them from making that all-too important first step on the road to Cinemalaya.