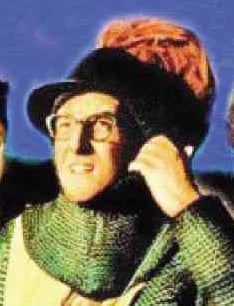 SELLERS. Liked pushing himself to the limit.

Our recent notes on versatile actors who play multiple roles in one movie production have prompted readers to cite other amazing feats of thespic “poly-creativity” on the silver screen.

—No, it wasn’t because the production was strapped for cash! Rather, the famously over-achieving Murphy just couldn’t resists making life “difficult” for himself—and impressing the heck out of moviegoers—by utilizing makeup and prosthetics in many creative ways.

Similarly amazing is the achievement of Peter Sellers in “The Mouse That Roared” (1959), where he portrayed four different characters, including a prime minister, a count, a grand duchess and a military leader!

The comedy film is about a tiny European country that dares to wage war against the United States(!), and the characters Sellers portrays are every bit as crazy as that loopy plot conceit.

Sellers also went to town by way of his “multifarious” participation in “Dr. Strangelove,” Stanley Kubrick’s own satire on warring nations. Clearly, he was an actor who liked pushing himself to the limit, and his antic energy and ambition made his starrers truly special.

For her part, Deborah Kerr was known more for her beauty and great screen presence than for her thespic daring, but she made viewers sit up and pay attention with her unusually versatile work in the 1943 production, “The Life and Death of Colonel Blimp.”

Playing a series of desirable women who all manage to elude the film hero’s urgent embrace, the three characters she variously plays end up as the production’s “unreachable” ideal in men’s ardent but fruitless quest for perfect beauty!

Clearly, Deborah Kerr is the pluperfect embodiment of that cinematic ideal, so her mesmerizing portrayals are greatly appreciated to this day.

Most amazingly of all, in “Kind Hearts and Coronets” (1949), British acting icon Alec Guinness stopped the cinematic show in its tracks with the eight characters he portrayed—all members of a family hated by a vengeful young man who serially does all of them in!

The abhorred relatives who end up as his victims include a lord, a pastor, a general, an admiral, a couple of youths—and a suffragette who loves riding in hot-air balloons!

Guinness’ versatility is impressive enough, but what makes his multiple characters truly sensational is the fact that none of them is a simplistic, shallow caricature.

It’s said that, some years ago, Robin Williams wanted to do a remake of “Kind Hearts and Coronets,” but nothing came of it. That’s a relief because nobody, not even the wantonly gifted Williams, can out-Guinness Guinness!