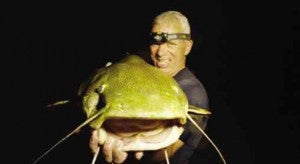 THE ANGLING guru poses with the catch of the day.

“Angling guru” Jeremy Wade hosts the Discovery Channel show “River Monsters,” where he puts his vast knowledge of fishing techniques to good use. Fishing has become a challenge because, he said, the crew is given a very limited time for filming.

“If we don’t catch a fish, we don’t have a program,” said the biologist-host in a phone interview.

According to Wade, the most important thing to remember about angling is to think before throwing the bait in the water.

He explained: “I stop and think; I imagine that I am a fish and I am trying to work out where I would be in the water and that relates to the underwater geography. This is very important for the show because we have about two and a half weeks to do all the filming. For the actual fishing, I may have only three or four days.”

“River Monsters” tackles freshwater mysteries, and focuses on Wade’s tracking of underwater culprits. Captured fish are returned to the bodies of water whence they came, after identification and cataloguing.

For the sixth season, Wade and his crew visited a different ecosystem to investigate deaths that may be caused by dangerous species of fish. Wade recounted: “We were in a very remote part of the Amazon. It was in Brazil, close to the Peru border. The problem with this kind of place is that, if anything goes wrong, we can’t just take somebody to the hospital, we have to deal with that situation ourselves. We don’t take a paramedic; we have training… but [it’s better to just] avoid getting in trouble.”

The six-episode “River Monsters” makes for entertaining viewing, he said, because it required him and the show’s creators to explore new avenues.

“The list of large, dangerous freshwater fish is quite short. And because we thought we were getting short on material, it made us think a bit deeper. For example, we normally investigate just one victim. But for this coming season, there was a passenger boat on the Amazon that sunk, and nobody knew [how] exactly. More than 200 people disappeared. And we looked into that.”

Filming was often demanding, due to the unpredictable behavior and activities of Wade’s targets: “[With] freshwater life, you are working in the dark. This makes ‘River Monsters’ so challenging. I have to predict where a certain fish is going to be at a certain time in order to bring it out and show it to the cameras.”

Wade said operating in tough environments can be difficult especially for the Season 6 episodes, but stressed that the job is ultimately very rewarding.

“We set out to reach a wide audience. We didn’t want it just to be people who go fishing, which would probably just be a small segment. The surprising thing is we are watched by a lot of children, including some very young [ones]. So, to get people interested and enthusiastic about the outside world, that is very electrifying. I gave up teaching because it was too hard. But now, I’m reaching a very wide audience!”

Donald Trump returns with “All-Star Celebrity Apprentice,” where the fan favorites from previous seasons return to battle it out 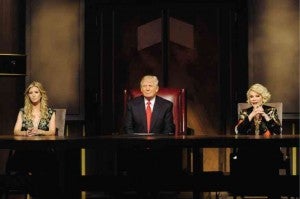 anew for charity. Certain challenges will require the contestants to reach out to their network of celebrity contacts for assistance or donations, leading to surprise cameos by some of the world’s biggest stars and pop culture icons.

MTV Pinoy is in search of new VJs. These young people will be the voices and faces of MTV in the Philippines and they will follow in the footsteps of MTV Pinoy’s first batch of VJs—VJ Sam Pinto, VJ Yassi Pressman, VJ Andre Paras and VJ Josh Padilla.

Male and female aspirants, aged 16 to 24 years old, are invited to join the nationwide search. The VJ hunt will end with the announcement of winners on Oct. 3.

Those interested in becoming MTV VJs can simply visit the MTV booths in the following venues for auditions from 10 a.m. to 6 p.m.: Ayala Center in Cebu on June 21; Centrio Mall in Cagayan de Oro on July 5; MarQuee Mall in Pampanga on July 12; Glorietta in Makati on July 20; and TriNoma in Quezon City on Aug. 3.