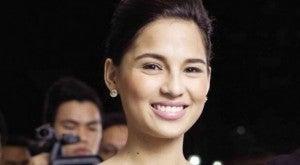 STUDIO provides Jasmine Curtis-Smith a bodyguard on the set

From the Inquirer tabloid Bandera: Controversial Celeb was feeling blue. Latest sweetheart had just publicly given up on their “romance” and CC looked inconsolable.

Lost in that personal telenovela, CC wouldn’t even acknowledge coworkers—not even Glamorous Newsmaker, who was dismayed by the cheap stunt.

Recently, still sleep-walking along the corridor, CC bumped into a wall—to the amusement of onlookers.

The groupie claimed that she bumped into FP in a mall and that FP was wearing a flimsy outfit.

One of the posts was accompanied by snapshots. But that was not FP in the photos! GF had fallen victim to FP’s Notorious Impostor. FP and NI don’t really look alike, but some people still get conned.

Another Industry Veteran’s brush with identity theft was a tad more disturbing.

Dubious Character had long been pretending to be IV online, trolling cyberspace with the mission to seduce clueless men.

DC reportedly tried to molest Seasoned Hunk, who escaped from the predator’s claws in the nick of time.

IV soon learned of DC’s shenanigans and promptly issued a caveat on the Net.

Will this save other struggling male starlets from exploitation by creepy DC?

GE not only cast aspersions on TP’s professionalism; he also made fun of TP’s physical appearance. These comments soon reached TP.

Is that why TP got hooked on cosmetic surgery?

But then again, in spite of the makeover, TP has failed to approximate GE’s allure. 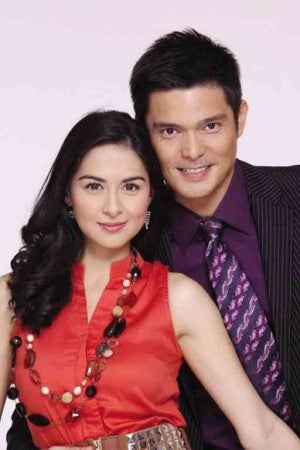 FOR MARIAN Rivera and Dingdong Dantes, a US holiday

Seems Dazzling Star is back to old ways. In spite of a tarnished track record, DS was given another chance by the industry.

Still, DS remained difficult, arriving  hours late for shoots. More time would then be spent dolling up DS, prolonging the delay. When harassed staffers inquired if the makeup artist was finished, DS invariably snapped: “Why are you rushing me?”

This week’s top show biz news in Bandera (and why we are moved, if we are  moved):

Julie Anne San Jose natatakot mag-concert sa Araneta Coliseum? (She has good reason to. Not everyone can fill that place up.)

Claudine Barretto natakot damputin ng mga pulis, kusang sumuko; nagpiyansa ng P100,000 para makalaya. (And this drama that no one wants anything to do with continues…)