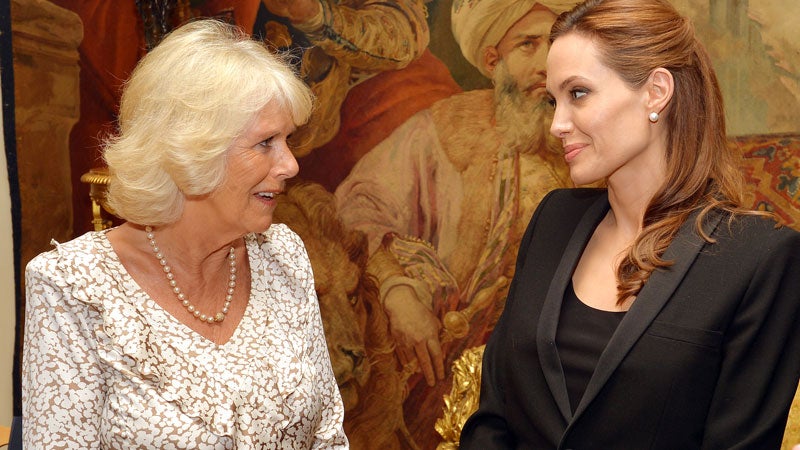 Camilla, Duchess of Cornwall, left, meets Angelina Jolie, as the actress talked about her campaign against sexual violence in war zones during a meeting, at Clarence House, London, Thursday June 12, 2014. AP

LONDON — Angelina Jolie can add royal recognition to Hollywood stardom. The Oscar-winning actress has been named an honorary dame — the female version of a knight — by Britain’s Queen Elizabeth II.

Jolie, a United Nations special envoy, received the honor on Friday for her work combating sexual violence in war zones.

Jolie, who won a supporting actress Academy Award in 2000 for “Girl, Interrupted,” has spoken of scaling back her movie roles to focus on humanitarian work. She said that “to receive an honor related to foreign policy means a great deal to me, as it is what I wish to dedicate my working life to.”

Because she is not a British or Commonwealth citizen, Jolie won’t be entitled to use the title “dame” before her name. Previous U.S recipients of honorary knighthoods include director Steven Spielberg, Microsoft founder Bill Gates and former President Ronald Reagan.

Jolie, who was in London this week to co-host an international summit on sexual violence, was among hundreds of people recognized in the queen’s annual Birthday Honors List for services to their community or national life.

Most of the honors go to people who are not in the limelight — from soldiers and civil servants to academics and entrepreneurs — but there is always a sprinkling of famous names.

Three-time Oscar winner Daniel Day-Lewis was made a knight “for services to drama” and can now call himself Sir Daniel. The actor, who won Academy Awards for “My Left Foot,” ”There Will Be Blood” and “Lincoln,” said he was “entirely amazed and utterly delighted in equal measure.”There were damehoods for novelist Hilary Mantel, author of the prize-winning Tudor page-turners “Wolf Hall” and “Bring Up the Bodies,” and for fashion designer Zandra Rhodes.

Actress Maggie Smith, who plays the imperious Dowager Countess of Grantham on TV’s “Downton Abbey,” was made a Companion of Honor, an award limited to 65 people “of distinction.”

“Homeland” star Damian Lewis was named an Officer of the Order of the British Empire, or OBE.

The British actor said he was “very surprised but very happy” with the honor.

“I decided to do the very un-British thing of accepting the compliment,” Lewis said.

In the field of science, there was a knighthood for physicist Thomas Kibble, whose work contributed to the discovery of the Higgs boson — the so-called “God particle.”

Among those honored for charity work was the late Stephen Sutton, a teenager who raised 4 million pounds ($6.8 million) while battling terminal cancer. Sutton, who died in May at age 19, was named a Member of the Order of the British Empire, or MBE.

Sylvia Lancaster, who founded a campaign against hate crime after her daughter, Sophie, was attacked and killed by a gang of youths in 2007 because of her Goth appearance, received an OBE.

Recipients covered a wide range of achievements, from confectioner Chantal Coady, honored “for services to chocolate making,” to civil service debt manager Barry Cox — “for services to debt” — and Arthur Dean, president of the Dwarf Sports Association. He was recognized for services to people with restricted growth and to disabled sport.

Britain’s honors are bestowed by the monarch, but recipients are selected by committees of civil servants from nominations made by the government and the public.

In descending order, the honors are knighthoods; Commander of the Order of the British Empire or CBE; OBE; and MBE. Knights are addressed as “sir” or “dame.” Recipients of the other honors have no title, but can put the letters after their names.