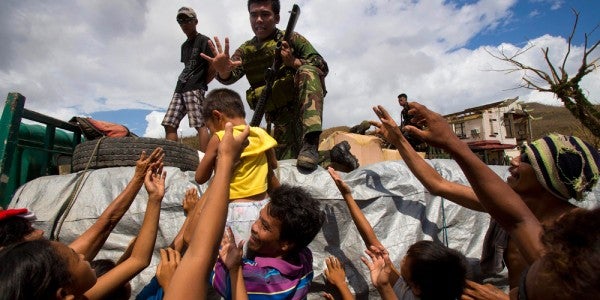 “Our effort is basically to reach the majority of the population. We know that most of us watch popular TV programs. Maybe there’s nothing wrong if we would include a bit of education to the public through our local drama series that is popular. We could get through the ideas we want to give the public about disasters,” Alexander Pama, Executive Director of the National Disaster Risk Reduction and Management Council said on a press briefing Friday.

He cited, for instance, in local TV series, parents could tell their kids to evacuate immediately during a disaster especially if their area is flood-prone.

“Maybe we could take advantage of the popular TV programs that have a wide reach,” Pama said.

If disaster terms such as tsunami, storm surge or a tidal wave will be explained in popular shows, then it will be a big help.

“There are things we have to do. It may sound funny but at the end of the day we are looking at the medium that is effective,” he said.

Pama said he is willing to formalize his proposal if that is what it takes to achieve their goal of educating the public.

He said that although impossible, zero casualty rate is what they are aiming for this typhoon season.

“But if you’re going to be realistic about it, there are a lot of factors to be considered. One of this is the cooperation of the public,” Pama said.

He added that the government has been making efforts to “simplify” the forecasting and warning system for the public to be able to understand better.

The Department of Education is also playing a big role to educate the youth.

“We know that among us parents, it’s a big convincing factor when our kids will tell us to evacuate,” Pama said.

Celebrities are also now being tapped as ambassadors for disaster preparedness.

Manny Pacquiao, for instance, is part of Safe Steps, a public service campaign to spread awareness of disaster preparedness.

“We will exert what is available to optimize the media and the means of relaying this. (We are counting on) Those who are believable to the people especially the masses in far-flung areas who do not have a background on disaster awareness,” he said.

Making good use of ‘celebrity power’