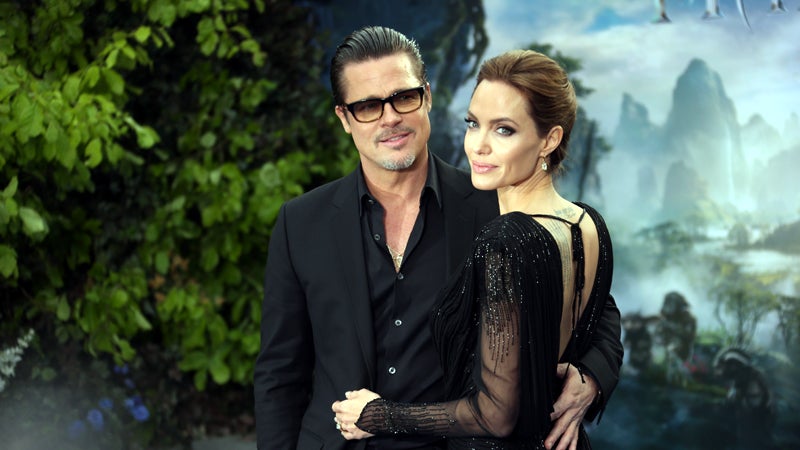 May 8, 2014 file photo, actors Brad Pitt and Angelina Jolie arrive for the “Maleficent” exhibit in Kensington Gardens, London. The exhibit showcases some of the costumes and props from the film “Maleficent,” before they go on display to the public at the O2 in London. The film releases in theaters in the U.S. on May 30, 2014. AP FILE PHOTO

SHANGHAI — Movie star Brad Pitt is visiting China with his partner, actress Angelina Jolie, effectively ending an unspoken ban after he angered communist authorities by appearing in the 1997 film “Seven Years in Tibet”.

Jolie was in Shanghai on Tuesday to promote her latest film “Maleficent”, a modern retelling of the life of Sleeping Beauty’s arch-nemesis, along with three of their children, but Pitt seemed intent on keeping a low profile.

Right at this moment, they (the children) are in dim sum classes with their dad,” Jolie said, referring to the popular southern Chinese cuisine.

The family visited a contemporary art museum and took walks in the commercial Chinese city, she said, but made no mention of the earlier controversy.

“It’s been a wonderful experience for our family,” she told journalists at Shanghai’s luxury Peninsula Hotel, where the family is staying. Pitt did not appear at the news conference.

Pitt previously played Heinrich Harrer, an Austrian mountain climber who became friends with the Dalai Lama at the time of China’s takeover of Tibet in 1950.

China considers Tibet part of its sovereign territory and has accused Tibetan spiritual leader the Dalai Lama, who now lives in exile, of seeking independence for the region.

The Hollywood Reporter said the controversy already appeared to be easing as Frenchman Jean-Jacques Annaud, who directed the Tibet film, was making the movie “Wolf Totem” backed by the state-run China Film Group.

Pitt has also appeared in advertisements in China for the Cadillac brand of US auto giant General Motors since last year.

On China’s Twitter-like microblogs, few appeared to be aware of the ban — which was never announced by Chinese officials — but some criticized him for the role.

“Tibet separatist,” said one under the name Guihaixiachong while another called him an “Anti-China celebrity”.

Jolie said she was thrilled her latest film “Maleficent” had debuted at the top of the box office, raking in nearly $70 million in North America over the past weekend. The movie not only casts Jolie in the title role as the malevolent fairy but was also produced by the star.

“This type of film is really one you do for the audience. It thrills me that people are enjoying it and it’s a success,” she said.

Jolie: We won’t change our security on red carpet