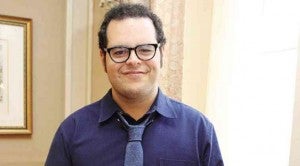 GAD. “There’s nothing more powerful than the gift of making a person laugh in the face of huge adversity.” Photo by Ruben V. Nepales

LOS ANGELES–“Olaf! Olaf!,” Zach Braff yelled upon seeing Josh Gad, who voiced the snowman character in “Frozen,” outside the Gramercy Suite of New York’s Waldorf-Astoria Hotel. They hugged. We had just interviewed Zach, and it was Josh’s turn to chat with us. The two actors play brothers in the new comedy-drama, “Wish I Was Here,” which Zach directed and cowrote.

Upon settling down on a chair, the bespectacled actor, who originated the Elder Cunningham role in Fil-Am Robert “Bobby” Lopez, Trey Parker and Matt Stone’s acclaimed musical “The Book of Mormon,” talked about how he wanted to entertain as early as when he was a 5-year-old kid watching comedians in the Catskill Mountains. He also wanted to entertain his mother.

“My parents went through a divorce,” said Josh. “There was conflict in my house. My weapon to combat the sadness that I was surrounded by was to make my mom laugh. I knew that that weapon was a very powerful thing. There’s nothing greater, and I have seen it more profoundly with ‘Frozen’ than with anything else, because it connects with kids in such a unique way. There’s nothing more powerful than the gift of making a person laugh in the face of huge adversity.”

Josh shared how he taps his humor and the appeal of Olaf to entertain children who are seriously ill. “I make phone calls to kids who have a week to live, or kids who are combating debilitating diseases. The only thing they want is a phone call from Olaf. How powerful is that? I don’t do brain surgery. I can’t cure cancer. But, what I can do is make a person smile. That is the greatest gift I could ever possibly imagine having. That’s an honor.”

Asked if he’s interested in reprising his Olaf role in the Broadway adaptation that Robert, his wife Kristen Anderson Lopez and Disney are planning, Josh replied, “I don’t know. I would be so honored to even be asked to do something like that. But, there’s a couple of things. One is, I don’t know that I would be the right guy to be playing a snowman onstage every day. I also feel like it’s hard to recreate something that you’ve already done.

Josh claimed that he got the “Book of Mormon” role, for which he earned a 2011 Tony Award nomination, by accident. He said that Robert mistook the vocals of another actor, Barrett Foa, for Josh’s. Robert offered the “Mormon” role to Josh, as a result.

When did Robert find out? “Bobby figured it out by the time I sang the first note of ‘Hello!’” Josh said with a chuckle about the song in “Mormon.” “Bobby was like, ‘That is an interesting noise that’s coming out of you.’ It was funny because he wrote the song, ‘Man Up,’ as a high-range song. My voice does work better in those higher chords. Bobby never backed down, even when I didn’t think I could do it. He just pushed the limits of what my voice could do.”

Josh gushed about Robert: “He is incredible. He has become what the Sherman brothers were, or what (Alan) Menken and (Howard) Ashman were, to my generation. He and Kristen are rapidly becoming the songwriters of this generation. I am very excited about the things they have in the works.”

In “Wish I Was Here,” Josh’s Noah has a proud moment wearing a space suit in Comic-Con. On when he had such a proud phase in real life, Josh, who has two young daughters with his wife Ida Darvish, said, “’The Book of Mormon’ was that moment for me…I had given four years of my life to that character onstage. I sacrificed a lot to do it. I just  had a child a month before I had to move to New York, whom I had to leave behind in Los Angeles.”

Josh spoke as enthusiastically about Zach as the latter greeted him. “Zach and I have known each other for the better half of the year now,” Josh said. “I fell in love with him the first time I met him because he is so charismatic and jovial. He has the biggest smile and the warmest heart.”

Also in the cast of “Wish I Was Here,” which centers on Zach’s Aidan, a struggling actor, dad and husband at a crossroads in his life, are Kate Hudson, Mandy Patinkin, Jim Parsons and Ashley Greene.

Josh, who played Apple cofounder Steve Wozniak in “Jobs,” will also be seen in the comedy, “The Wedding Ringer.” His TV credits include “New Girl,” “The Comedians” and “1600 Penn.”

Quipping that he had “a very complicated childhood,” Josh traced his family’s roots. “My dad was a Jew who was born in Afghanistan. He was born there at a time when there was more tolerance. But, even during that time, there was still a great deal of intolerance. When he was 13, he and his family realized there were far more welcoming places in the world than Afghanistan. He wound up moving to Israel, which clearly embraced the family with far more open arms than the Afghani community.”

“My grandparents were Holocaust survivors, so I have this community of people around me who came from very different perspectives of intolerance,” Josh continued. “It has been something that absolutely shapes who I am. When you see what they overcame to accomplish the things that they have accomplished in their lives, that always keeps things in perspectivelike box-office failures or getting rejected for a roleyou realize how insignificant it is in the bigger scheme of things.”