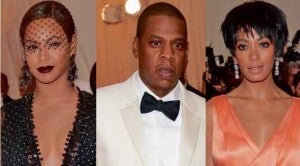 Topping the list is the feisty kickfest recorded by an elevator’s security camera, showing Beyoncé’s younger sister, Solange, getting back at brother-in-law Jay-Z over some real or imagined grudge.

Much to his credit, Jay-Z didn’t hit back at snarly, kicky Solange as she let him have it good and hard, and the ferocity of her attack was blunted only by the presence of a burly bodyguard, who restrained her from inflicting more serious damage on her befuddled bayaw.

Nobody would open up as to the real reason behind Solange’s ferocious assault, with the parties involved pointing out that “all” relatives fight once in a whileso, what’s the big deal?

Uh, yes, but none of our relatives has ever assaulted us in quite so nasty a fashion, so it is a big deal!

Hot on the heels of the Jay-Z-Solange kickfest, combative couple Tori Spelling and Dean McDermott were recently seen on their reality TV show, engaging in a hurtful exchange of accusations and protestations over Dean’s most recent case of marital infidelity.

Acting every bit like a woman wronged and scorned, Tori went over the top in full, weepy and shrieky display, making some viewers wonder if such extreme emotionalizing was one reason for Dean to seek solace and quiet in another woman’s arms?

For his part, Dean occasionally resorted to over-the-top emotionalizing himself, reminding viewers that all this was being recorded for the benefit of the couple’s reality show’s camerasso, could there be a weird kind of method to the couple’s excessive display?

True enough, in the succeeding days, magazine show hosts pointed out that the couple’s shows ratings had markedly improved after their recent TV tiffso, welcome to the wonderfully exploitative world of US reality televisionwhere absolutely nothing is sacred!

On the local show biz scene, the “raging relatives” are paced by the beautiful but combative Barrettos. Currently, Claudine and her parents are fighting and feuding with Gretchen and Marjorie, and heaven knows when they’ll finally bury the hatchetnot in each other’s backs!

More recently, Freddie Aguilar and his daughter, Meagan, have also been at odds over what she perceives to be her sad lot after her father married a very young woman. Like the Barrettos, they’re waging their feud not in private, as other people discreetly do, but in full view of the media.

It’s time for cooler heads to intervene and remind these and other feuding stellar families that blood may traditionally be believed to be stronger than and transcend everythingbut, it shouldn’t lead to blood-letting!