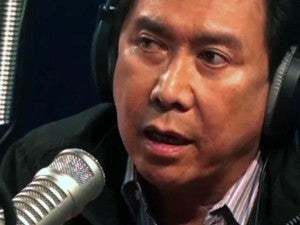 “I have forgiven her a long time ago. She should be treated with understanding,” Tulfo told INQUIRER.net over the phone on Friday shortly after it was reported that Barretto made peace with his brother, Raffy, also a broadcast journalist.

“She should be pitied. I heard that she allegedly needed medical help but has not been doing it. She should be treated with understanding,” the elder Tulfo said.

Asked for his reaction about Barretto’s supposed peace with Raffy, Tulfo said: “If I know my brother, I think he was just humoring her.”

The rift between Barretto and the Tulfos stemmed from first, the fistfight at the Ninoy Aquino International Airport (NAIA) in May 2012 when the actress and her estranged husband, Raymart Santiago, got entangled in a brawl with Ramon Tulfo.
After the incident, Tulfo’s brothers – Raffy, Ben and Erin – berated Barretto and Santiago on their television show, prompting the couple to file separate charges against the three brothers.

The charges were junked in November 2013 as the complainants failed to show up in court.

The couple separated in 2013 following allegations of domestic abuse by Santiago against Barretto.

The actress has been embroiled in a family drama with sisters Gretchen and Marjorie, who both supported Santiago on their youngest sister’s charges of domestic violence.

They also alleged that Claudine was mentally ill and has a history of drug abuse, which prompted their mother Inday Barretto to post an open letter to Gretchen in which she called her daughter a “liar.”
RELATED STORIES

Ramon Tulfo: Raymart’s group ganged up on me while Claudine kept on cussing
Claudine Barretto makes peace with Tulfo brother