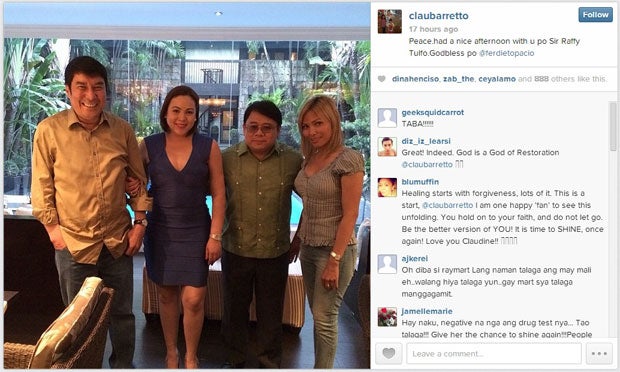 MANILA, Philippines—Actress Claudine Barretto has made peace with columnist Raffy Tulfo, two years after his brother, Ramon “Mon”, she and estranged husband, Raymart Santiago figured in a brawl at the Ninoy Aquino International Airport.

Barretto posted a photo on Instagram where she was clutching the arm of a smiling Tulfo. Barretto’s lawyer Ferdinand Topacio is also seen in the photo.

“Had a nice afternoon with you po, sir Raffy Tulfo. Godbless po,” she added.

Barretto and Santiago filed grave threat charges against the Tulfo brothers Raffy, Ben and Erwin after they berated Barretto on their television show in 2012.

The Tulfos were defending their eldest brother after a viral video titled “Thrilla in NAIA” showed Barretto and Santiago beating up the elder Tulfo at the NAIA May 2012.

The brawl stemmed from an altercation between Barretto and Tulfo who was caught taking picture with his cellphone of the actress scolding an airport staff.

The charges were junked in November 2013 as the complainants failed to show up in court.

The couple separated in 2013 following allegations of domestic abuse by Santiago against Barretto.

The actress has been embroiled in a family drama with sisters Gretchen and Marjorie, who both supported Santiago on their youngest sister’s charges of domestic violence.

They also alleged that Claudine was mentally ill and has a history of drug abuse, which prompted their mother Inday Barretto to post an open letter to Gretchen in which she called her daughter a “liar”.

Raymart, Claudine win some, lose some vs Tulfo brothers

Raymart Santiago, pals gang up on Mon Tulfo at Naia 3

Read Next
One Direction fans head in one direction—to MOA for tickets of 2015 concert
EDITORS' PICK
Metro Manila stays under GCQ until July 31
LIST: Quarantine status of provinces, cities in PH until July 31
Win the Samsung Galaxy S20+ BTS Edition at the Smart K-Quiz Night on July 18
Water remains our saving grace right now
Cebu City status downgraded from ECQ to MECQ until July 31
How Filipinos are embracing digital technology amid the coronavirus pandemic
MOST READ
ABS-CBN to start retrenchment by end of August, as franchise remains elusive
Defensor dares Tañada to public debate on ABS-CBN franchise issue
Metro Manila stays under GCQ until July 31
Escudero tells Duque: ‘Please just do your job without fooling yourself or us’
Follow @MJcayabyabINQ on Twitter
Don't miss out on the latest news and information.