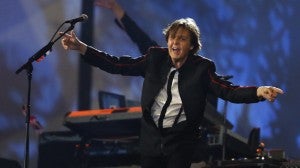 SEOUL, South Korea — Paul McCartney has cancelled his concert in South Korea next week due to the virus-caused illness that forced him to call off his entire Japan tour.

The 71-year-old former Beatle had planned to hold concerts in Japan and South Korea as part of his world tour.

Seoul-based Hyundai Card Co. Ltd. issued a statement Wednesday citing McCartney as saying he’s “sorry to be letting fans down,” and that he hopes to visit South Korea soon.

The statement said McCartney was still not feeling better and the cancellation was unavoidable.

McCartney was scheduled to perform at a Seoul stadium on May 28. It would have been his first concert in South Korea.

His illness caused him to miss his four scheduled concerts in Japan, including two in Tokyo this past weekend.