Although they are not on speaking terms, she will fight tooth and nail for daughter Andi
By: Bayani San Diego Jr.
Philippine Daily Inquirer / 01:06 AM May 21, 2014 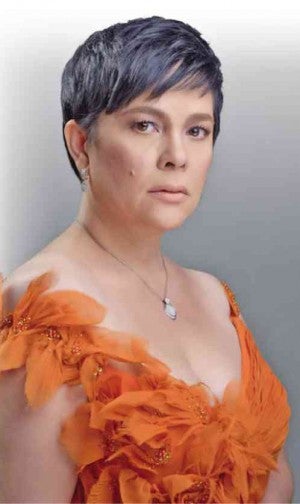 VILLAINESS tries comedy on TV, too.

When talk turns to equally headstrong daughter Andi Eigenmann, expect Jaclyn to dish out those quick quotes that are dripping with equal parts sugar and spice, with a dash of venom as well.

(Remember Jaclyn’s response to an enemy who dared bad-mouth her and her daughter? “I’d love to sue her but I’m too busy.”)

She insists that she tries not to meddle in Andi’s love life but then again, when push comes to shove, the lioness in her bursts out of the cage.

“Of course, I have to protect Andi,” she explains. “I cannot turn my back on her. I’m just being a mom.”

Now, there are rumors that Andi is either dating child star-turned-DJ Tom Taus or has reunited with ex-beau Jake Ejercito.

“I support all her endeavors,” she asserts, half in jest. “Even if I know that she is headed toward the wrong direction, I cannot stop her. I will voice out my opinion but I cannot interfere. That’s her life. That’s her choice.”

Today’s generation are worlds away from her batch, she points out. “They are super-advanced. Look at my granddaughter (Andi’s daughter with actor Albie Casiño) … Ellie’s only 2 and a half years old but she already thinks she’s an adult. She can turn on my cell phone on her own.”

She’s not the smothering type, either. “Andi’s turning 24. She can do whatever she wants as long as she takes care of herself. I want her to enjoy and live her life,” she clarifies. “At first, I was against Andi joining the business. I didn’t want her to get trapped in this industry. But I can see that she is finding ways to have a life away from show biz.”

She, however, admits that she and Andi are not on speaking terms these days. They live under one roof but they don’t talk to each other.

“I guess it’s better that way because we won’t end up fighting. At least it’s peaceful at home. Hindi ako tumatalak! I’m not making noise all the time.”

They only argue about ordinary mother-daughter issues, she insists. “Why hasn’t she eaten breakfast yet? It’s already late and she’s still in bed. Her room is a mess. The usual stuff.”

Even though they are on a ceasefire, Andi would often break the tenuous truce whenever she needed to have certain paperwork signed, Jaclyn relates.

“My bedroom door is like a fax machine. Andi or her assistant would slip in the documents through the closed door,” she recounts. 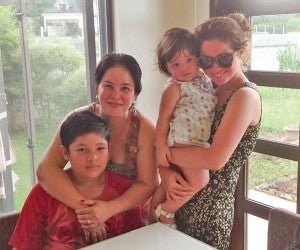 Needless to say, she would sign anything for her daughter.

She is just as devoted to her 12-year-old son Gwen.

When the boy underwent a medical procedure recently, the doctor had to shove Jaclyn out of the operating room. “I wanted to be inside… even though it’s not allowed.”

After the Inquirer interview, she says she will accompany her son to the clinic for a checkup. “He’ll get mad. He doesn’t like me talking about these things.”

Her kids and grandkid give her a semblance of normalcy in the topsy-turvy world of show biz. “I’m happy and content. I can’t ask for anything more. I don’t need a boyfriend … I have Andi, Gwen and Ellie with me,” she exclaims.

She also has a thriving career as the resident prima contravida of GMA 7.

After making a splash as Doña Charito in “Mundo Mo’y Akin,” she was quickly offered the role of Trixie in “Carmela: Ang Pinakamagandang Babae sa Mundong Ibabaw.” She’s also a regular in “Vampire ang Daddy Ko.”

She made sure that Charito is different from Trixie, though. “If Charito is loud and crazy, Trixie is more subdued and level-headed. Just because Charito clicked, I don’t want all my characters to be like her.”

Doña Charito was such a riot, she was spoofed by Michael V as Doña Ina in the gag show “Bubble Gang.”

“I guested in ‘Bubble Gang’ as Doña Ina’s sister,” she says. “It’s flattering. In the past, stand-up comics would imitate Jaclyn … Now, it’s Doña Charito.”

She is so effective as a villainess that it seems people have forgotten that she has played downtrodden martyrs for ages (particularly, the long-suffering Magda in the old ABS-CBN soap “Mula sa Puso”).

“It was a career move on my part,” she says. “I wanted to prove that I can do all sorts of roles.” That she is not just a dependable supporter of indie movies, that she can be a fixture in teleseryes, too.

“Soaps put food on the table; indie movies are food for the soul,” she states, matter-of-factly, in her inimitable nonchalant way.