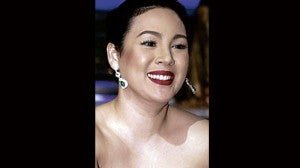 In a taped television interview aired Sunday on ABS-CBN, Barretto claimed that her marriage with Santiago was “fake.”

“I regret na pinakasalan ko si Raymart … It was fake… I should have backed out, we were living in sin pala,” Barretto told “Buzz ng Bayan” host Boy Abunda.

Barretto and Santiago got married twice, once in 2004 in a civil rite held in Isabela and another one in a Christian ceremony held in Tagaytay City on March 27, 2006.

Santiago’s legal counsel however denied Barretto’s claim, saying that the registration of the marriage came in late but “it was not fake.”

The couple had a falling out in 2013 following allegations of domestic abuse on the part of Santiago although rumors of their breakup started circulating in 2011.

In the same interview, Barretto also claimed that she has been diagnosed with “battered wife syndrome.”

Battered woman syndrome, according to Merriam-Webster Online, is “the highly variable symptom complex of physical and psychological injuries exhibited by a woman repeatedly abused especially physically by her mate.”

“I am going through difficult times…there are a lot of lies and a lot of deceits,” Barretto said in Filipino.

“They say that I am not fit as a mother but my children are doing well in school.”

Barretto and Santiago have two kids, Sabina, 10, and Santino, 6.

Barretto also denied that she has a mental illness like what’s being repeatedly mentioned in reports.

“Mental illness is different from mental torture,” she clarified.

Raymart Santiago: I did not abuse Claudine

Claudine Barretto tweets: Someone tried to poison me and my kids