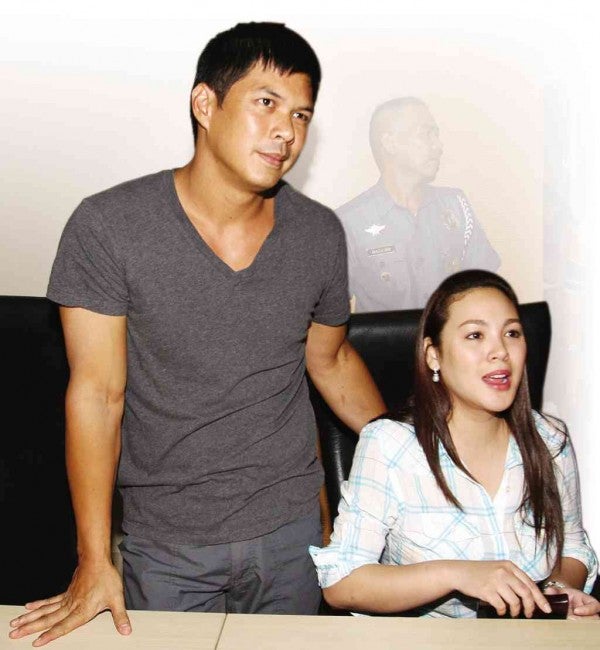 Raymart Santiago is thankful for the “guaranteed exclusive contract” that GMA 7 just recently offered him.

“Nothing is final,” Raymart told the Philippine Daily Inquirer on Friday, “but I appreciate this gesture of trust from the network. Needless to say, it will help me get through this situation (marital woes).”

GMA 7 vice president for entertainment Redgie Acuña-Magno said the network hoped to get the contract signed before the end of September. “This will be good for him,” Magno said, “since it assures him of a [steady] income while he is with the network. I’m sure this news will please him, take his mind off negative writeups.”

The network exec was referring to the actor’s word war with—on top of a lawsuit filed by—estranged wife Claudine Barretto.

On Thursday, Claudine charged Raymart with violating Republic Act No. 9262, or the Anti-Violence against Women and Children Act of 2004, in the Marikina City Regional Trial Court. The actress claimed she was “physical, sexually, psychologically abused by my own husband,” and submitted photos showing wounds and bruises allegedly inflicted by Raymart.

In July, Claudine filed a petition for temporary protection order against Raymart that she later asked to be made permanent. Raymart retaliated by filing a petition for habeas corpus, and then seeking sole custody of their two children—Sabina, 9, and Santino, 6.

“It is better to have a horrible ending than to live a life of unending horror,” was how Claudine’s legal counsel, Ferdinand Topacio, explained the actress’ decision to go public with her complaints and seek help from the court.

Point of no return

The lawyer said he doubted that Claudine would ever reconcile with her husband of seven years. “She knew this when she filed the first case. It was the point of no return,” Topacio told Inquirer by phone.

Before filing that first suit, Claudine had been “awfully depressed,” Topacio said. “She would burst into tears whenever she was asked about [Raymart] and how the situation had affected their kids. She’s doing a lot better now. She is still sad, but recent events have made her stronger [and] emboldened her.”

“She’s digging a deeper hole for herself,” was how Raymart saw Claudine’s decision to file another case. Through his legal counsel, Ruth Castelo, Raymart claimed to have “strong and solid evidence in his defense.”

In a statement obtained by Inquirer on Thursday, Castelo said, “We’re ready to dispute all of Claudine’s allegations, one by one. We’ll do that, though, at the opportune time and at the proper venue.”

She added that whatever photos or videos Claudine had in her possession should be presented as evidence in court. “Raymart believes only the courts, and not the public, can determine his innocence.”

Magno, who has worked with both Claudine and Raymart in various TV projects, came to the latter’s defense. “I’ve always known him to be a family man, a dedicated husband and father,” he said. “More than anything, he is worried about how this controversy will affect their children.”

Raymart was busy with the family-oriented series “Home Sweet Home” when his marital problem made the headlines, Magno told Inquirer. “I asked if he wanted to take a break. He said he didn’t because work kept his mind off the issue.”

Magno recounted days when Raymart brought the kids to work. “So he could bond with them, he said. He’s a super loving father. He treats their adopted child, Sabina, as his own. More than a coworker, Raymart has become my close friend.

He told me recently how exhausting it was that the situation had become bigger and more controversial.”

The actor seems well-loved by his other Kapuso bosses, including GMA 7 chairman and CEO Felipe L. Gozon. “We never had a problem with Raymart,” Gozon told Inquirer.

“Raymart is extremely loyal to us,” added Magno. “We didn’t ask him to, but he turned down offers to appear in other networks’ programs. We’ve been working with him for over 15 years. He … [would sit] down with the production teams to help improve his shows.”

Actor Arthur Solinap, who worked with Raymart in “Home Sweet Home,” said he found the actor quiet and aloof at first. “When I got to know him better, mabait naman pala (I realized he was OK). People told me he was a joker, but he wasn’t like that on the set. And despite everything he was going through, he never caused any delay in production.”