‘Kathniel’ goes back to work 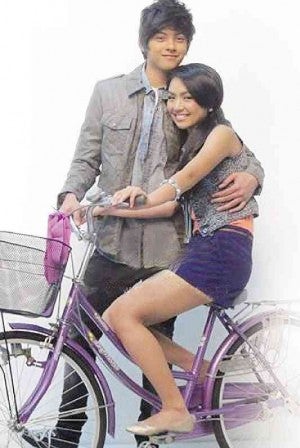 DANIEL Padilla and Kathryn Bernardo star in a novel-turned-movie.

Actress Kathryn Bernardo, who has 2.99 million followers on the microblogging site Twitter, tries to be a good role model for teenagers by being image-conscious.

“I’m very conscious of my actions in public. I make sure to be honest and candid in my interviews,” Bernardo told reporters during her launch as the new endorser of Ruffles Bags. “But I also try not to be too hard on myself. It’s normal even for show-biz celebrities to commit mistakes.”

Bernardo defended her screen partner and rumored boyfriend, Daniel Padilla, who is often described as aloof: “DJ (Padilla’s nickname) verbalizes and shows what he feels. He is uncomfortable talking (with reporters) about serious stuff, kaya minsan ’di siya makausap nang maayos. But he’s easy to get along with, once you get to know him.”

Bernardo celebrated her 18th birthday on March 26. She has just returned from a European vacation with her family. “We went to Paris, Amsterdam and Milan,” she said. “I came home for a short while then left again for South Korea with some friends. I worked very hard in the past few months, so I maximized the monthlong break that the network (ABS-CBN) gave me.”

The teen star added: “I’d like to go back to Paris. The Eiffel Tower is beautiful! I didn’t expect to enjoy the trip to Korea but I did! Now that I’m rested, I’m ready for more work.”

Bernardo and Padilla are working on the movie adaptation of the book “She’s Dating the Gangster,” by Bianca Bernardino. “We resumed shooting on May 2. We had taken a break so I could concentrate on my debut and DJ, on his birthday concert,” she said. “We haven’t tackled the heavy scenes; we’re just warming up.”

Cathy Garcia-Molina, who helmed the concluded top-rating program “Got to Believe,” is directing the movie.

Bernardo was a guest performer in Padilla’s sold-out concert at the Big Dome on April 30. The event marked the actor’s 19th birthday on April 26.

Bernardo’s wish for her screen partner and suitor: “Good health—and I hope he remains humble in spite of his success. People love him as he is, so I hope he does not change.”