A tale of two mothers 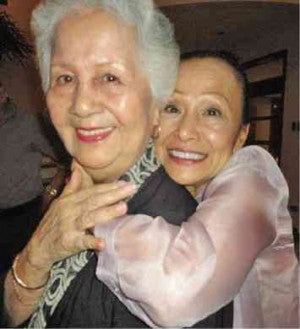 My mom’s oldest sister, Grizelda Barredo (nee Imutan) passed away on April 2 after suffering a stroke. The one visitor who came to see her regularly on her final days in the hospital was my mother, Ligaya. Knowing the two sisters’ backstory, it was a given that my mother wanted to be nowhere else but at my aunt’s side.

Auntie Daku (as she was fondly called by most of our family, but her siblings called her “Nene”) and my mother were born about nine or 10 years apart. (My mom’s birth records were destroyed when her town’s municipio burned down so, to be honest, she doesn’t know, save for the month, when her exact date of birth is).

They shared a zodiac sign (Leo) and life-changing experiences over the course of their connected lives.

The two of them remained close for as long as I know. After my mother gave birth to me, it was at my aunt’s house that she recuperated before heading back home to Angeles City.

My mother witnessed my aunt devoting herself to nurturing her daughter, legendary prima ballerina Maniya Barredo, as she ascended to superstardom in the world of classical ballet, while raising the rest of her brood (which includes civil servant Michael and sculptor-painter Gabby) and being a committed wife to her husband Genie.

My mother’s own journey as a mother of artists began many years later, when another of Auntie Daku’s daughters, Ria, urged her to have me audition for “The King and I” in 1978. Needless to say, both my aunt and my mother practiced devotion and sacrifice when it came to their children’s artistic pursuits.

This devotion could be traced further back to when my aunt was around 15 and my mother around 5 or 6. My mother said Auntie Daku saved her life.

Around the time that my grandfather, Leo Imutan, passed away from tuberculosis in Pulupandan, Negros Occidental, in the early 1940s, my grandmother Carmen, 32 years old and overwhelmed with eight children, placed some of her younger ones in the care of either relatives or friends (my mother was placed with a family that wasn’t related by blood) then headed to Manila.

My aunt set out to get her little sister back. I remember my mom asking Auntie Daku how she figured out where she was; my aunt just said, “I don’t know, I was just led there, I could feel where you were.” With trademark feistiness and after much arguing and negotiation, my aunt left that house with my mother in tow.

They took a boat from Negros Occidental to Manila. The ride was a choppy one. My mom remembers throwing up for much of the trip, and losing her only pair of shoes.

Once in Manila, and although they didn’t have an address for their mother, they were intent on finding her. Seeing one of their brothers playing in the street one day, they knew they had come to the right place.

Later in life—as late as a few months ago—I remember my mom saying to my aunt, “Nene, if you didn’t come to get me, I don’t know what kind of future I would have had.”

In the days leading up to my aunt’s death, the two women spent time together. My mother asked as many questions as she could about her childhood—why certain people made certain decisions that impacted their lives so greatly.

Since my aunt was much older, she was able to provide my mother with much-needed answers, therefore giving closure to old family issues.

When my aunt was in the hospital, my mom was at her bedside, at times saying, “Nene, wake up… I’m not done asking you questions.” Perhaps all the answers my mother needed were in fact already given to her, as God decided it was time to call Auntie Daku home.

I will always remember my aunt as the perfect picture of poise, elegance and grace. She had the air of a dancer about her, with gorgeous posture and a head held high. She had a hearty laugh, and love for everyone around her. She kept her dignity, no matter how adverse her circumstances. By contrast, my mother was athletic and tomboyish, but still a gorgeous creature who made something good out of something bad.

My aunt was well-known in our family for writing letters. Hundreds upon hundreds were sent through the years to every one of her kids, nieces, nephews and grandchildren (I have a few 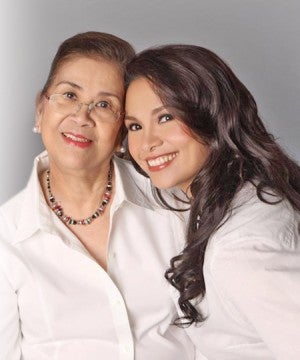 stashed away somewhere). She said there was so much she had written about her life and about herself, all these sheets of paper hidden in a trunk at her home. While my aunt was still alive, she gave my mom a snippet of pages, and after she passed away, letters written for my mom that were never sent were finally received.

I don’t think I’m the only one in denial that my Auntie Daku is gone, that I won’t hear her laugh that hearty laugh of hers again, or see her pursed lips on her resting face, her perfectly painted long fingernails, her always looking so well put together, even if she was just at home.

For the longest time, she colored her hair, save for a strip of white in front. In later years she would allow her whole head to go silver. And she wore it well. She wore life very well, no matter what it dished out.

To my mom and all my other aunts who must carry on, have a wonderful Mother’s Day! You are the toughest bunch of women I know, and I think I speak for Gerard and our cousins when I say we are proud to be descended from you all.