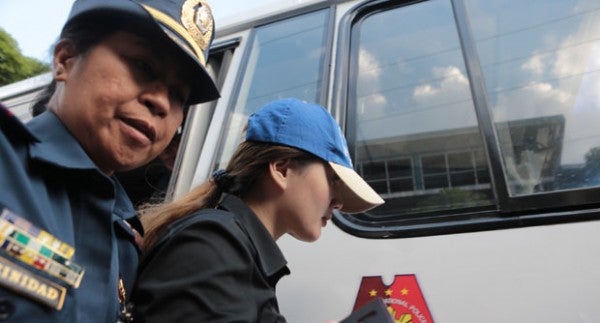 Deniece Cornejo surrenders herself at the PNP headquarters in Camp Crame.
PNP-PIO Photo

MANILA, Philippines–After deciding to face the music, Deniece Cornejo will spend her first night in jail at a cell at the Anti-Transnational Crime Unit of the Criminal Investigation and Detection Group.

After almost two weeks in hiding, Cornejo personally turned herself in to the authorities at the PNP Headquarters in Camp Crame around 4 p.m.

She was accompanied by her relatives and lawyers Ariel Magtibay Jr. and Connie Jimenez. Then they went  to the office of  PNP chief Director General Alan Purisima for a brief dialogue.

Cornejo – along with businessman Cedric Lee, Simeon Palma and several others – has been charged with serious illegal detention, a nonbailable offense in connection with the Jan. 22 mauling of Navarro at a rented condominium unit of Cornejo in Taguig City.

Lee and Palma were arrested on April 27 in Eastern Samar. The arrest warrants for Cornejo and the two were issued last April 21.

He said Chief Superintendent Tom Bañas, PNP Human Rights Affairs Office chief and a family friend of Cornejo, received the feelers and arranged the date for her surrender on May 5.

“She was under so much stress… She was very subdued. She would rather prefer to be silent,” Magalong said when asked about her condition.

Magalong said it was Cornejo’s “personal choice” to surrender to the PNP and not to the NBI in Manila, where Lee and Palma are detained.

Despite this, Magalong assured that Cornejo would not be given any special treatment.

“She will be treated like [an ordinary suspect],” he said.

But before Cornejo surrendered, Magalong said relatives of Cornejo had asked the police to “respect” the rights of the model.

No info on co-accused yet

Aside from Cornejo, Lee and Palma, suspects Jed Fernandez, Jose Paolo Calma and Ferdinand Guerrero have yet to acknowledge their arrest warrants.

Asked if Cornejo’s co-accused are sending surrender feelers, Magalong said, “to be honest, we do not have information on others yet.”

Magalong said Cornejo would be presented on Tuesday morning to Taguig RTC to return her warrant of arrest.

The court of origin will then release a commitment order and decide where Cornejo would be properly detained.

Last April 16, Cornejo posted a P12,000 bail for her grave coercion case, also in relation to the mauling of Navarro.

Vhong Navarro vs Deniece Cornejo: Grin and bear it