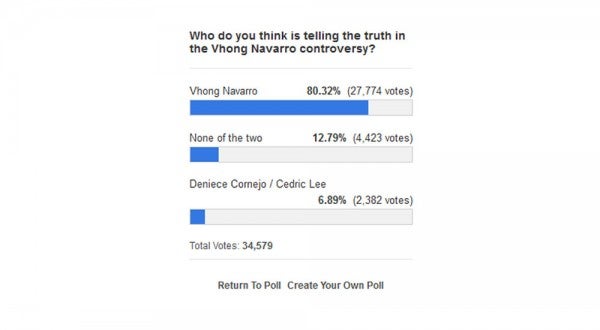 MANILA, Philippines—An unofficial survey conducted by INQUIRER.net showed that most of the people who joined the poll think comedian and TV host Vhong Navarro has a more credible story compared to Deniece Cornejo and Cedric Lee over the mauling incident at a posh condominium in Taguig City two weeks ago.

The week-long poll generated a total of 34,579 respondents, with 80.32 percent (27,774 votes) favoring Navarro on the question: Who do you think is telling the truth in the Vhong Navarro controversy?

Only 2,382 respondents, or 6.89 percent, think Cornejo and Lee are telling the truth.

The rest, 4,423 respondents, or 12.79 percent, think none of the personalities involved in the case were telling the truth.