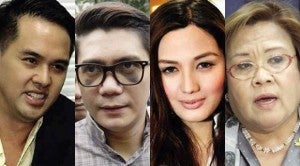 Less than a week after the warrants came out, fugitive businessman Cedric Lee and Simeon Palma, two of the men accused of beating up actor-comedian Vhong Navarro early this year at a condominium in Bonifacio Global City, were arrested Saturday morning in Oras, Eastern Samar, according to Justice Secretary Leila de Lima.

De Lima said the pair were arrested by agents of National Bureau of Investigation (NBI) and would be brought back to Manila as soon as possible.

She said Lee and  Palma, who also goes by the alias Zimmer Raz, would  be temporarily detained at the NBI facility pending a commitment order to be issued by the Taguig City court, which released the arrest warrants on April 21.

The two and several others are charged with serious illegal detention, a nonbailable offense, in connection with the Jan. 22 incident at the condo unit of commercial model Deniece Cornejo, who is also an accused in the case.

Cornejo earlier posted bail for the separate charge of grave coercion filed against her by Navarro. She also filed a rape complaint against the ABS-CBN star but it was dismissed on April 10 by the Department of Justice (DOJ) for lack of probable cause.

With the arrest of Lee, the principal accused, the court could finally continue with the criminal proceedings, said Navarro’s legal counsel Alma Mallongga.

According to Mallonga, Navarro is “thankful and grateful” to the NBI, the DOJ and other law enforcement agencies involved in the arrest of Lee and Palma, “because they did not stop until they’ve reached their objective. They did their work well.”

Mallongga explained “that for the trial to commence, the accused has to be arrested and arraigned. For this reason, we are thankful. Vhong can now focus on preparing for the trial.”

The lawyer said Navarro had expressed “appreciation for the vigilance and continued support of friends and supporters.”

“The media have been very instrumental keeping the public interested in the case. They’re the reason our government agencies were motivated in solving this,” the lawyer noted.

Lee, along with his sister, Bernice, Sajed Fernandez Abuhijleh, aka Jed Fernandez, and Ferdinand Guerrero were also charged by Navarro with grave coercion after they allegedly tried to frame him for rape.

NBI Director Virgilio Mendez said that Lee and Palma had been under surveillance since Friday night and were arrested by the NBI team the next morning. “We are still trying to arrange transportation to bring them to Manila.”

The two men will be presented to the Taguig City Regional Trial Court on Monday, Mendez added.

De Lima said Jose Paolo Gregorio Calma, one of the accused in both cases, was able to leave the country on April 10 based on the records of the Bureau of Immigration.

In a later interview in Digos City, the DOJ chief said she had ordered the NBI to bring Lee to Manila “as soon as possible.”

“I said they should bring him using whatever mode of transportation available to Manila, maybe by land or by plane,” De Lima said at the sidelines of the graduation ceremony for the College of Law of Cor Jesu College.

Regarding the other suspects, she said, “we already know where they might be. For example, Deniece Cornejo or Jed Fernandez and one or two more.”

De Lima said all of the country’s airports and other exit points were being watched for possible attempts by other suspects to leave the country.

“The warrant of arrest issued by Taguig RTC is effectively a hold departure order, so all immigration officers were under instruction to arrest them the moment they were seen in airports,” she said.

With a report from Orlando Dinoy, Inquirer Mindanao

Navarro confident cases vs Lee et. al to go to trial after arrest—lawyer