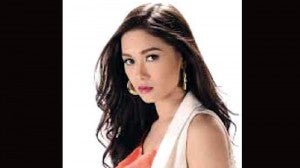 MANILA, Philippines—Maja Salvador apparently was the first to swallow her pride to end her rift with Kim Chiu, as she admitted that she made the move to make peace with Kim.

(There is no need to show your pride.)

The former best friends became estranged middle of 2013 when news broke out that Kim’s ex-boyfriend Gerald Anderson and Maja were dating. The two have since admitted their relationship.

News of their reconciliation was announced early April by radio host-showbiz columnist Ogie Diaz  via a post on his Twitter account when he attended a thanksgiving party at a high-end bar in Taguig City where the two actresses attended.

Pressed to explain more, Maja only said one really has to swallow her pride to end the fight.