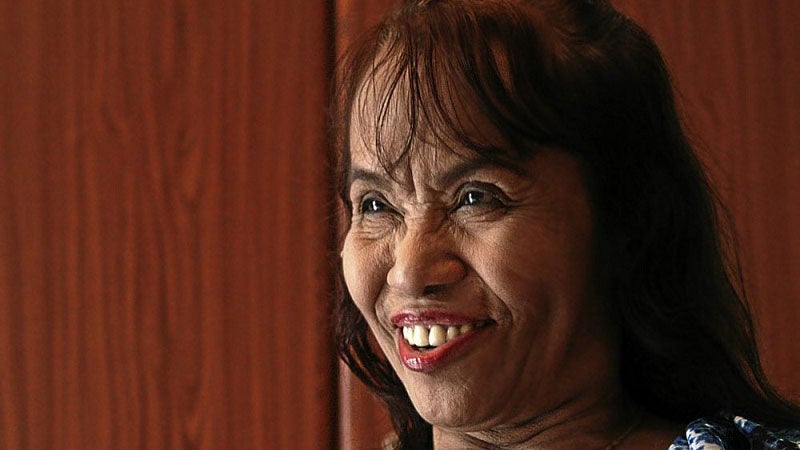 MANILA, Philippines—From her Hermes bag, to her dance shows, to her movies, to her rendition of Wrecking Ball, and to her most recent voodoo spells, Mommy Dionisia Pacquiao, or Mommy D as she is fondly called, has cemented herself as a worldwide figure just like her son.

Manny “Pacman” Pacquiao’s mother has been on every conceivable medium of public consciousness after she was accused of putting Timothy “Desert Storm” Bradley under her spell, but it’s not the first time that Mommy D was in the public’s mindset.

Just as her son had his trademark haymakers and knockout punches, Mommy D also had her best hits.

In no particular order, here are Mommy D’s most notorious moments as the “Pacmom.”

Her son may be one of the best boxers in history but it doesn’t mean that the Pacmom won’t rush to her son’s defense when someone steps on him.

When the Philippine Senate’s most animated figure, Senator Miriam Defensor-Santiago, gave some legislative pointers to Pacquiao regarding the then-Reproductive Health bill, Mommy D had her counter ready.

(Don’t you meddle with my son, instead pry on those who are lewd, the lewd!)

Yes, she dropped the “M-bomb” twice, probably her own version of a 1-2 punch combo.

Santiago, on the other hand, managed to get back up and decided to let bygones be bygones.

“Pugilistic excellence is not one of my ambitions, I have no desire to spar with Pacman,” Santiago said on May 25, 2011 after Mommy D’s outrage. “I feel affection for him and Aling Dionisia, because we are all Visayans.”

Protective as she is, Mommy D would not let anyone accuse her son as a thief.

When Bureau of Internal Revenue hunted the Pacman for his allegedly unpaid taxes after his title fights, Mommy D was once again on the rescue.

“Why are you focusing all your efforts on my son?” Mommy D snarled at it on November 27, 2013. “Why don’t they turn their efforts on those corrupt politicians?”

Pacquiao, the BIR claims, escaped paying taxes amounting to P2.2 billion from his fights in the United States.

“Their office, be it at the highest floors, will be put down when God casts His anger upon them.”

Hell hath no fury like a woman scorned, and Mommy D was the epitome of this saying as she chastised her son’s newfound friends, the “Protestant pastors.”

Mommy D believed that her son had lost via knockout against Juan Manuel Marquez because of the pastors, who aren’t actually Protestant but Mommy D believed so, as they had allegedly lingered with the Pacquiao entourage and changed the boxer’s mindset and faith.

“That’s what he (Pacquiao) gets for changing his religion,” Mommy D said on December 9, 2012. “They always pray, with Manny losing sleep.”

“I hope he listens to me when he returns, and be a Catholic again.’

No amount of ballroom dancing could surpass the power of Mommy D and her Wrecking Ball, or, as Netizens would have it, “Riking Bull.”

In an episode of ABS-CBN’s Gandang Gabi Vice, Mommy D belted out her own rendition of Miley Cyrus’ single and, in the process, set Twitter on fire.

Needing no formal introduction, and apparently the first verse, Mommy D immediately sang the chorus to the delight of Vice Ganda, the audience, and everyone glued to the show.

She may be a protective mother, but she also knows how to console her son’s beaten opponents.

But before she gave some motherly advice to Bradley on Sunday, Mommy D was caught on camera as if she was hexing Bradley. She, however, downplayed it the moment reporters got hold of her.

Mommy D, who once again set Twitter ablaze, was in the audience for the first time. She said she was actually praying when the camera panned on her.

“I prayed that He helps Manny not to be knocked out by Bradley,” Mommy D said.

And it was not just ordinary citizens who took notice of Mommy D. British journalist and TV host Piers Morgan expressed his love for the Pacmom on Twitter.

After the fight, Mommy D immediately climbed the ring to congratulate his son and console the defeated Bradley.

Mommy D reportedly told Bradley that “you win some, you lose some” and hugged the Desert Storm.

Bradley, gracious in defeat, told Mommy D, “I believe you, Momma, I believe you,” and gave the thumbs up to Pacquiao.