Kris on ‘KrisTek’: A joint project 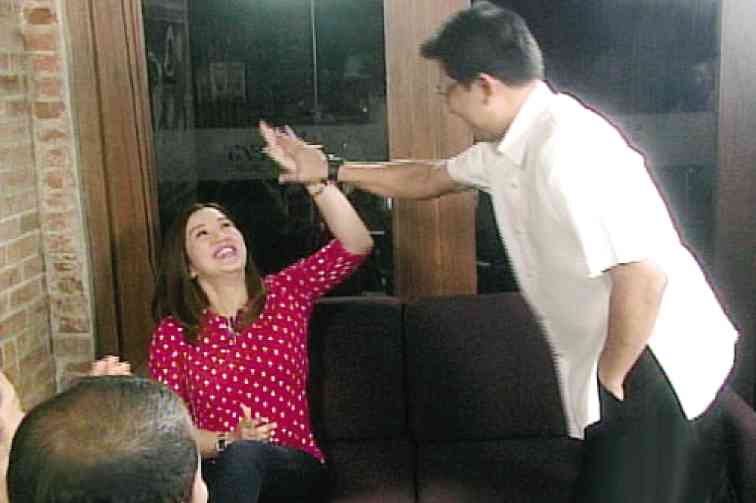 KRIS Aquino wants to keep mum about Herbert Bautista who guested on her show. www.abs-cbnnews.com

Over the past two weeks, netizens have become unwitting (unwilling?) spectators to the guessing game pertaining to the identity of Kris Aquino’s new suitor.

Some speculated that Kris was dating Brazilian-Japanese model Daniel Matsunaga; others claimed it was Bataan Gov. Abet Garcia. The name that sparked the loudest buzz was Quezon City Mayor Herbert Bautista’s. He was reportedly spotted dropping off Kris at the ABS-CBN compound recently.

Kris uploaded on Instagram a snapshot (which has since been deleted) of her family—including her sisters and President Aquino—with Mayor Herbert. The caption read: “Family Dinner.”

Just when everyone was convinced that “Bistek” (Herbert’s show biz nickname) was her mystery man, Kris started posting on the same social networking site thank-you messages to actor Derek Ramsay. The posts, she told her fans, were “up to your interpretation.”

And before the issue could take new twists and turns, Kris suddenly put an end to the mounting guesswork. In the April 7 episode of her prime-time talk show, “Aquino & Abunda Tonight,” Kris revealed—in what many jested was her personal Sona (state of the nation address)—that the boyfriend was, indeed, the QC mayor.

She read from a written statement, which she said was prepared with the help of Mayor Herbert: “Now there’s somebody in my life who is special…

We’re a work in progress; it’s a joint project that both of us are happily undertaking with maturity, respect and commitment,”

Sure enough, before long, Kris’ declaration—as everything she says and does—was all over entertainment websites, getting as many hits as news on pressing national issues.

From the online rejoinders, the romantic pair, now known as “KrisTek,” is drawing mixed feedback. Many sent well wishes; not a few were skeptical.

“I smell [a] political relationship and I will trim my fingernails if I did not get it right,” swore B3ntong.

To be fair, Kris denied last month that she would run for public office in 2016. “It’s not on the table,” she said in “Aquino & Abunda Tonight.” But she added that she wasn’t closing her door on politics altogether.

In her revelation, Kris said she hoped to strengthen what she and Mayor Herbert had “by keeping quiet and private.” Of course, a netizen offered unsolicited advice.

kapitanvic1: “Please leave the people alone…[don’t] force-feed them with every detail of what’s happening with [your] love life.”

“Kilig much ako sa kanila. May chemistry sila,” said Anonymous. “In fernes blooming [s’ya] at mukhang happy talaga…I think HB is the perfect match for her.”

(I shudder in happiness because of them. They have chemistry. In fairness, she is blooming and looks really happy. I think HB (Herbert Bautista) is the perfect match for her.

One fan, Giselle Najera, noted: “They are on the same wavelength.”

Joey Marquez, with whom Kris had an equally controversial relationship, wasn’t spared. In an ambush TV interview, Joey gave an inscrutable statement. “I’m very happy for all of us…for the entire world!” he said, laughing.

Ramsay didn’t think Kris was seeking publicity when she dropped his name earlier. “I don’t feel like I’ve been used,” he told reporters at his recent contract signing with Regal Films.

That should assure commenter kapitanvic1.

Read Next
Depp has high hopes for ‘Pirates 5’
EDITORS' PICK
153 protests filed vs China actions in PH waters in 2021 — DFA
Lacson wants DOF to suspend TRAIN law as oil prices rise
Delivering delight against all odds
Next level mobile photography within reach with vivo X70 co-engineered with ZEISS
Duterte blasts rights groups for overlooking the ‘other side’ of drug war
Leaked: A 60x Zoom and all-new Helio G96 mean a complete overhaul for TECNO Mobile’s new CAMON 18 series
MOST READ
Robredo to supporters: Be calm, gentle and do good deeds
Duterte inaugurates P684-M bypass road project in Quezon
Matibag calls Senate budget hearing ‘political,’ gets kicked out
Duterte: No drug dealers among the rich in PH
Don't miss out on the latest news and information.