Depp has high hopes for ‘Pirates 5’ 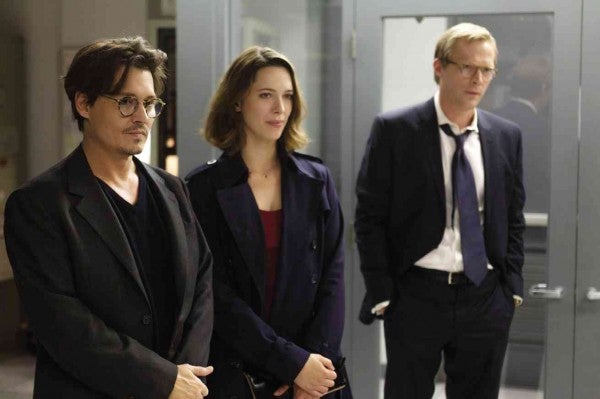 DEPP (left) with Rebecca Hall and Paul Bettany in “Transcendence”

LOS ANGELES—“If I was given the news that I was going to be smoke in about five weeks, I would celebrate every day. I would celebrate with the people that I love,” actor Johnny Depp said in reply to a question as to what he would do if he ends up in a similar situation with his scientist character in “Transcendence.”

Johnny’s Dr. Will Caster is working to invent a sentient computer that combines history’s collective knowledge and merge it with an uploaded conscious mind, including the complete range of man’s emotions. When anti-technology extremists inflict body damage on Will, he is given five weeks to live. That inadvertently paves the way for Will to prove his hypothesis. 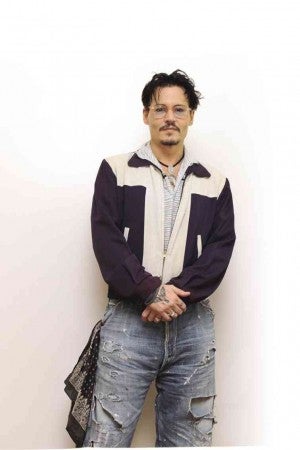 IN THIS interview, the actor admits that he has a hard time texting. “It’s foreign to me. I am very feeble in the world of technology.” PHOTO BY RUBEN NEPALES

With the help of his fellow researchers, his wife Evelyn (the very watchable Rebecca Hall) and buddy Max Waters (Paul Bettany), Will is uploaded into PINN (Physically Independent Neural Network). Will achieves transcendence but soon, his quest for power becomes a terrifying dilemma.

That’s the premise of “Transcendence,” Wally Pfister’s first crack at directing after doing superb work as a director of photography, notably in Christopher Nolan’s films.

“I would hope that it won’t be some monstrous, maudlin affair but [one] that we could celebrate and laugh about,” Johnny added about what he would do if he learned that he only had a few weeks to live. “Nobody escapes unless you can upload your consciousness. I would celebrate with anything you have got.” He quipped with a grin, “At that point, [even with] Drano (drain cleaner product). Why not?”

Johnny said, “The fact that you get another morning to take a breath, walk and live—that’s plenty to appreciate. Actually, when it really comes down to it, if one was offered some sliver of immortality, I don’t think I would want that. I would much rather just slowly, simply fade away into the air.”

Even if he’s promised immortality with his new love, actress Amber Heard? “Yeah, even with Amber,” Johnny replied. “Even with my kids. I mean, though in a heartbeat, I would upload any one of them to save their lives or to save their consciousness or whatever you call it. But I don’t know—I feel I am good sitting on a beach with a breeze going by, the waves hitting the beach. Simplicity is enough for me— that’s all I need.”

“Oof,” he said with a laugh when asked if he wants to be uploaded into PINN, if that sentient machine became a reality. “The computer would break, for sure. I don’t know if I want to be uploaded. As technology advances, as rapidly as it has, that means that by the time that technology is old, I will be in some pawn shop, where people plug a quarter and (I will) speak some sort of gibberish for no reason.” 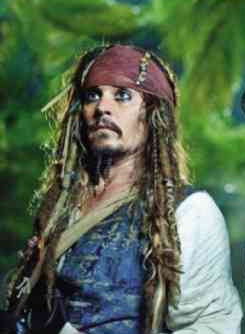 FOR THE LAST time, Depp will don Jack Sparrow’s costume in “Pirates 5”.

Speaking of gibberish, when was the last time this scientist-onscreen-only was stumped? “Every five minutes,” Johnny replied, chuckling. “If there’s a text and I have to answer it, it’s such a foreign thing (to me), crisscrossing thumbs and what not. I feel ridiculous doing it. It’s not anything I grew up knowing, nor did any of us. I am very feeble in the world of technology. All things electrical, I have a tendency to break them.”

Johnny has several films coming up but he singled out one: David Koepp’s crime-drama “Mortdecai,” where he plays the titular art dealer hunting for a stolen painting that’s linked to a bank account brimming with Nazi gold. Gwyneth Paltrow, Ewan McGregor,  Jeff Goldblum and Bettany costar.

“‘Mortdecai’ is very unique and special,” he gushed. “It’s very different from anything I have done before. We haven’t seen that type of caper movie for a number of years. If you go back and watch movies like ‘The Pink Panther’ or some of the wonderful French films with Louis de Funès, there’s really something great about those caper films that teeter toward farcical.”

The actor noted for being averse to watching his own movies quipped, “I am really looking forward to that one. I might actually even see it. Maybe.”

As for “Pirates of the Caribbean: Dead Men Tell No Tales,” Johnny confirmed that Joachim Ronning and Espen Sandberg, who were behind Norway’s Oscar- and Golden Globe-nominated “Kon-Tiki,” are still attached to direct.

“Everyone involved wants the script to be right and perfect,” Johnny explained. “So we have gone on to do other things (in the meantime). We are still going to do the film together. I enjoy them immensely. They are super talented. They have a great sense of humor. I think they have a really fun approach to what we are going to do with the next ‘Pirates.’ Very happily and proudly, I have welcomed taking part in the story and working directly with the screenwriter (Jeff Nathanson)—he and I. It’s working out really well that way.”

He added, “So I have high hopes for that ‘Pirates 5’ because if that’s really the last one, which it probably is, I feel that we owe it to the audience who went and saw the films so many times. We’ll do it right and end it on a high note.”